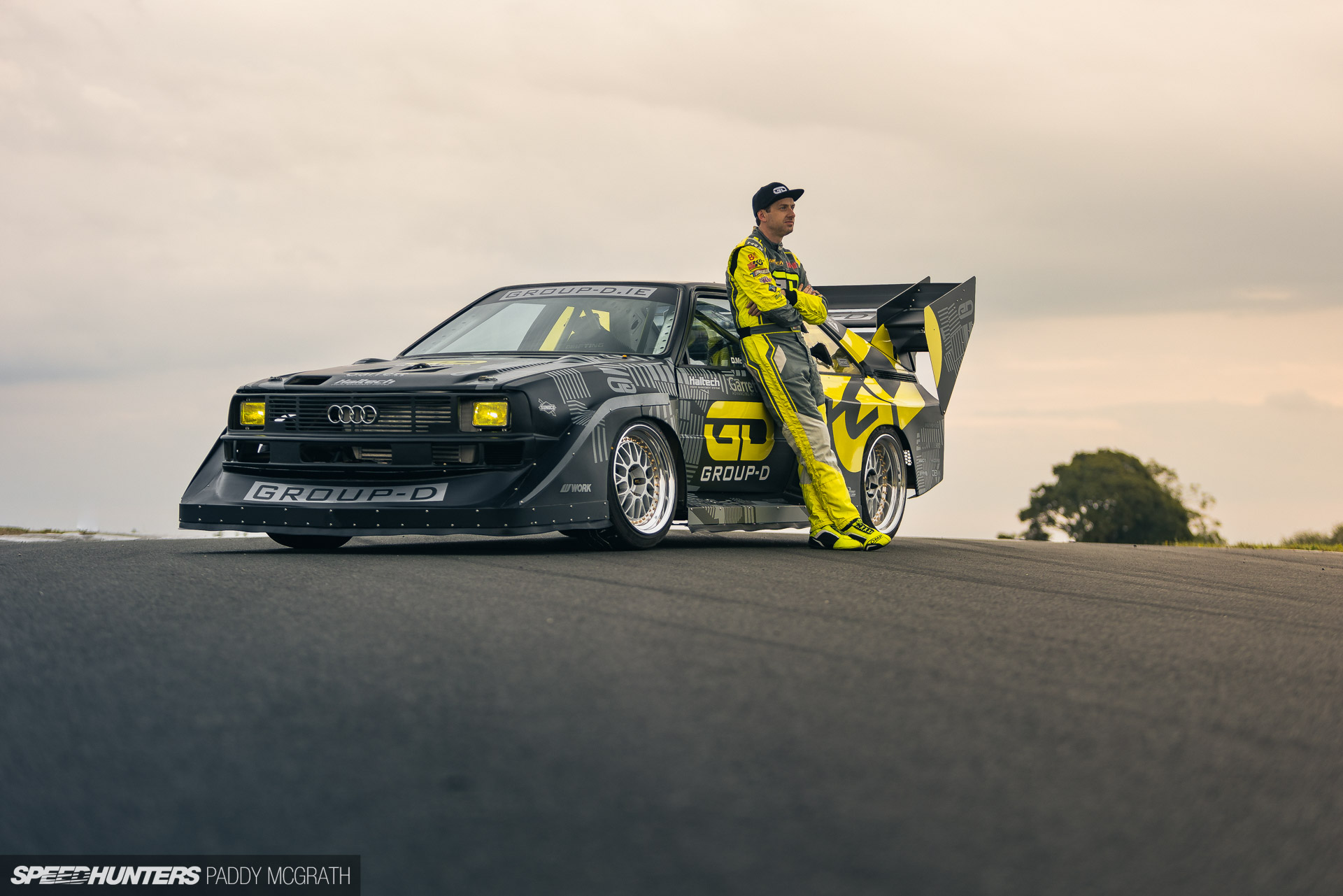 Don’t Call It A Quattro

Some things cannot be rushed.

If you set out to build what will be, without any doubt, your absolute dream car, you should be afforded all the time you need. There will always be the temptation to cut corners in order to just get it finished, and despite there being truth in the phrase ‘Perfect is the enemy of done’, it is something I see often used as an excuse for a lesser end product.

In this day and age, there is certainly more pressure to publicly deliver results of your work. Those that fail to feed the algorithms are doomed to be forgotten about and excluded from the various social media parties. But maybe these are parties that aren’t worth attending anymore?

In early 2015, we started documenting the build of Darren ‘D-Mac’ McNamara’s ambitious Group B-inspired Audi drift car build. From the get-go, Darren’s attitude towards the project in private was consistent: It’ll be done when it’s done.

I’ve lost count of the amount of people who’ve asked me about the project over the years, as if I had some secret insight into Darren’s brain and an ability to see into the future. However, never once did I doubt that this car would ever be finished. It just needed time.

I’m certain that I don’t need to explain the inspiration for this car as it’s based on one of the most iconic race cars of all time – the short-wheelbase Group B Audi Quattro S1 Evolution 2. A car with so much recognition, that it is easily identifiable by its sound alone. There are few others quite as distinct as that turbocharged inline-five, and the S1 Evo 2’s sound is maybe as famous as the car itself.

Curiously, and what perhaps even a lot of people today don’t realise, is that the S1 Evo 2 was not a particularly successful rally car. It made its WRC debut in July 1985, started just six events and won just one of those before Audi withdrew from Group B ahead of the series’ demise in 1986.

It’s maybe a bit harsh to judge a car which only existed in the WRC for about nine months, because who knows how it would have performed if it’d had the time to be developed beyond 1986. But it does raise an interesting point.

That a car can practically define an era of motorsport, without winning a single championship, is evidence that we actually judge cars by other merits.

While results and stage times are definitive, visual and aural impact are key subjective values. Again, there are few eras of motorsport that rival Group B for the sheer audacity of the cars.

A relatively open rulebook resulted in a field which often sought out very different ways of building cars to dominate the stages of the World Rally Championship.

Much like drifting, it’s the parallels between these open rulebooks which Darren identified as the perfect opportunity and justification to bring a rear-wheel drive Audi S1 into the world. Obsessed with Group B for as long as he can remember, he’s developed his own business into combining the worlds of ’80s rallying and drifting.

Naturally, with a genuine appreciation and passion for the original Quattro, Darren wasn’t going to cut one up for this build. Instead, a front-wheel drive Audi Coupé GT was sacrificed, very little of which remains beneath the skin today.

With an Audi front subframe and a rear subframe from Nissan, the use of a long-wheelbase donor car resulted in a wheelbase comparable to that of a Nissan Silvia.

I was always curious throughout the build about how the exaggerated aesthetics would work on the LWB platform, and purely from a visual perspective, it’s a lot more balanced looking than the awkward SWB S1 Evolution 2.

Your opinion may vary, but I think it’s a much better looking car for it.

The combination of the rally car’s front aero with the Pikes Peak rear wing and custom quarter panels, balanced with the 18-inch Work Meister M1s give the car a proper tarmac-spec stance.

The angle kit, knuckles and suspension arms are all custom Group-D items being used in conjunction with KW Clubsport 3-way coilovers with remote reservoirs.

These component choices allow the car to be familiar underneath the driver, while ensuring that the project is on a proven platform.

Braking is taken care of with R32 Nissan Skyline GT-R front discs and callipers, with custom Wilwood rear discs and handbrake calliper. A pair of R32 GT-R brake callipers are also used on the rear axle for the foot brake.

The interior is as purposely sparse and functional as you would expect for the car’s intended use. All of the requisite safety devices are in place, from the Stone Motorsport roll cage to the Sparco Drifting seat with TRS safety harness.

A Haltech iC-7 dash allows full monitoring of the vehicle’s vital systems through the Haltech Elite 2500 ECU. The steering wheel controls are a custom Group-D piece, and the Group-D billet handbrake is paired with the shifter for the Saenz 6-speed sequential gearbox.

The copious amount of ducting in the rear and rear-side windows feed cold air towards the twin-fanned, dual-pass rear radiator setup, with the rear boot lid vented to provide an exit path for the airflow.

Then, there’s the small matter of the powertrain itself.

Being a drift car, I would be pretty certain that there’s at least some trepidation from a few who are bracing themselves for what may lie beneath. 2JZ? LS?

To those few, you may now breathe a sigh of relief. To paraphrase Darren, this car couldn’t have had any other engine. It had to sound like a Group B era Audi Quattro. So much of the time spent building this car was ensuring that the engine was right.

The car could have been finished years ago if he had chosen practically any other engine, even a more modern Audi RS 3 motor, but for Darren, this was the only option.

Looking towards Scandinavia for inspiration on something that was both truthful to the car’s heritage and could make the amount of power required of a contemporary drift machine, the result is this 2.7-litre turbocharged inline-five.

Utilising the block from a 2.5-litre TDI Audi A6, which was stroked and bored to 2,650cc, some slight modifications were required to fit the S2 AAN cylinder head to the diesel block. Steel rods, steel crank and JE forged pistons with ARP rod bolts and main studs feature in the bottom end, with double valve springs, oversized valves, CAT camshafts and an adjustable cam pulley the highlights up top.

A Garrett GT3582R Generation 2 turbocharger has been mounted front and low with a Turbosmart wastegate. Exhaust and excess boost exit through the front bumper. Somewhere low and almost out of sight is a K&N air filter, while a compact three-inch Garrett intercooler keeps IATs in check. Fuelling is handled by ASNU 1,400cc injectors and a Veyron fuel pump.

Engine lubrication is taken care of with a Peterson dry sump system, with the dry sump tank being mounted inside the passenger compartment.

The result is a healthy headline power figure of 700hp, being transferred to the ground via the rear wheels only. An ACT triple-plate clutch, a GT-R V-Spec differential and Driveshaft Shop axles are responsible for turning that horsepower into motion.

From inception to its current form has taken over seven years, but there’s still fine tuning and development to come. We photographed this car immediately before its debut at LZ Fest, and just after its very first shakedown run.

Darren’s initial feedback was that the powerband is perhaps too narrow, resulting in peaky ‘all or nothing’ power delivery. They will continue to work on the car over the winter and problem solve these teething issues, perhaps reducing the turbocharger size or shortening the exhaust runners. Anti-lag will eventually be added to the mix, but it won’t be used to mask the inefficiencies in the current setup.

This car represents everything for Darren and Group-D. The entire identity of his business, and his livelihood, revolve around it. It’s more than just a dream car for him, it’s a realisation of everything he’s learned throughout his career.

It’s also worth remembering that as his personal project, it has sometimes needed to take a back seat for other client work. Yet, somehow there’s still some of this car in everything else he’s been building lately.

Some things are worth waiting for.

The D-Mac S1 Project on Speedhunters