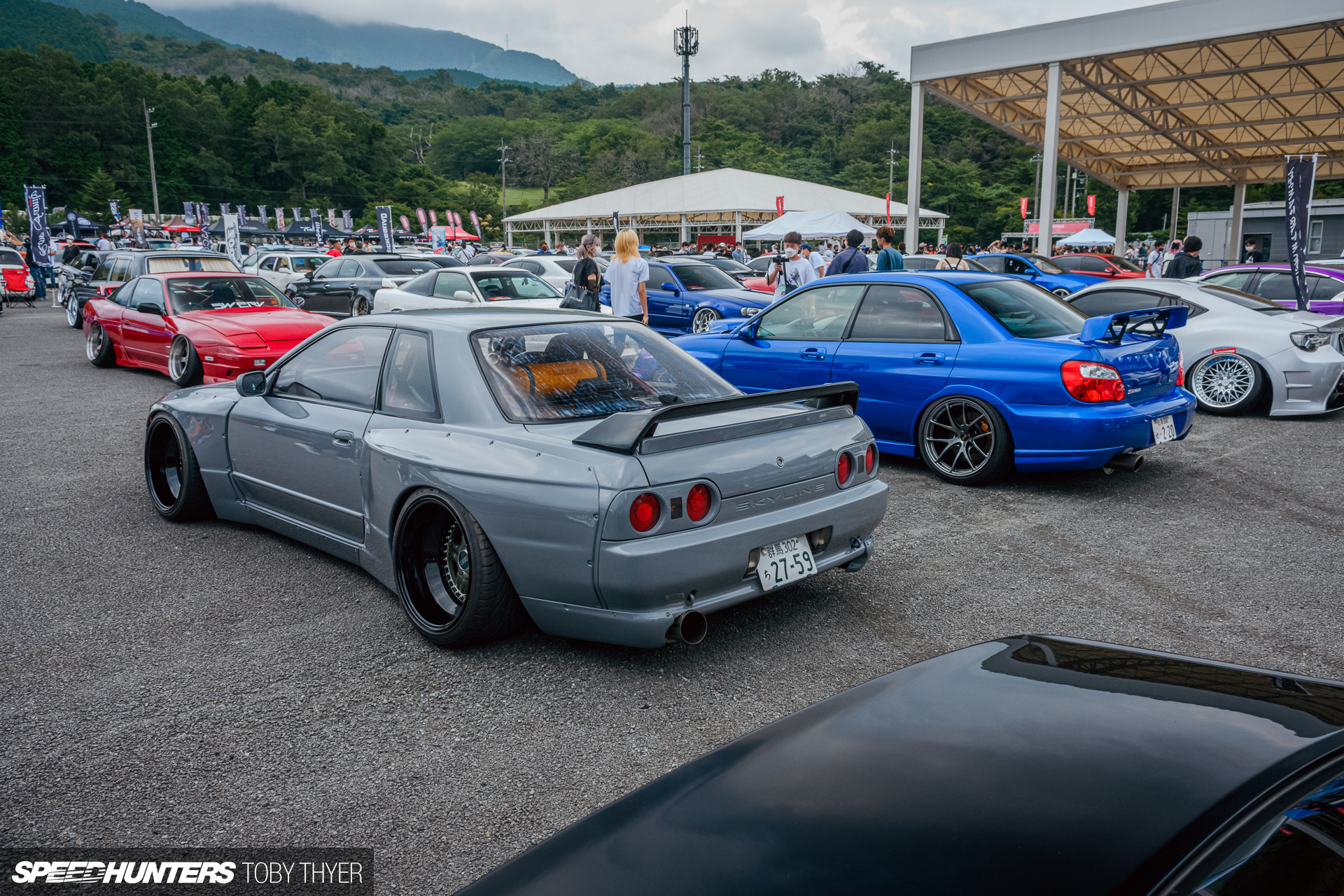 Living in Japan, there’s not much choice when it comes to cheese. It’s either mozzarella or expensive, bland camembert and brie. The same goes for most foreign products. Luckily though, when it comes to cars in Japan, you’re absolutely spoiled for choice.

But that fact brings about its own challenges when putting together a post like this one. I can never make my mind up; there are just too many great cars to choose from. So, as always, the cars I’m about to share with you may not be the fastest, the most highly tuned or even the coolest, but they are the ones that held my goldfish-like attention span for more than 36 seconds at A-Messe Japan, held at Fuji Speedway a few weeks back.

A custom orange leather interior is a surefire way to grab my attention, especially when there’s a spearhead where the gear shifter should be. I’ve organised a shoot with the GT-R’s owner, so watch this space for a more detailed look in the coming weeks.

Keeping with the Pandem theme for a moment, next up we have this wide-body EG Civic on a set of special edition RAYS Volk Racing TE37Vs. Throw an oversized wing into the mix and you’ve got the recipe for Honda perfection.

I’m told there’s a B18C5 engine from a DC2 Integra Type R under the hood, so this build might warrant a closer look in the future. Who’d like to see more?

I did warn you that some of these picks are not the fastest or coolest, but this little Suzuki Cultus (Swift), which has been restyled to look like its USDM-spec equivalent, the Geo Metro, was unique in a sea of mostly-stanced tuner cars.

Scissor doors on cars that never came with scissor doors are another thing that always make me smile.

I admire the time and engineering that’s gone into building this Mazda RX-8, although looking at the obvious race car intentions – and subtle nod to Mad Mike Whiddett’s ‘BADBUL’ when it was in its 2010 Need for Speed guise, I would be interested to know how much weight the new mechanisms add.

These wild US-style minitrucks greeted punters at the main entrance to A-Messe, but I can’t help but think they should have been at the centre of the action, getting the appreciation they truly deserve.

This first of the trio is a 1995 Toyota Hilux with a small block Chevy 350ci V8 engine in place of the original four-pot.

Next up is a Nissan 720, an actual USDM import, hence the steering wheel on the left side of the cabin.

There’s no V8 in this one, rather a 2.4L Z24 engine, which was only offered in the US. It’s a fully-tuned motor with a high-lift cam and Weber side-draught carbs. Oh, and plenty of chrome.

The wheels are Boyd Coddington items – mirror-finished of course – with Wilwood brakes tucked in behind. Like most minitrucks, this 720 rides on air suspension, and I love how the control unit has been integrated into the roofline.

The final minitruck is another Hilux, this time a 2003 model, also on air and with fully removable rear bodywork. Unfortunately we didn’t get to see the cool party trick this time though.

From the suicide doors to the custom dash, all the way to the utterly impractical tray space, this thing is absolutely mind-blowing. Under the hood is a 1995 LT1 5.7L V8, an engine usually found in Corvettes and Camaros, so I bet it drives as intensely as it looks.

I think these minitrucks are a riot, but what about you? If you’d like to see more, I’m sure I can ask the owners nicely for a feature.

My final pick from A-Messe Japan 2022 is this USDM Datsun 280ZX Turbo. Anything with ’80s-style turbo decals along the side will see me swooning for several minutes, but there’s so much more to unpack here so I’ve booked a shoot with the owner of this one too.

More stories from Japan on Speedhunters