The Studebaker Avanti was marketed as “The World’s Fastest Production Car” when it was released in 1962, thanks to the supercharged version of the vehicle that had just broken 29 world speed records at the Bonneville Salt Flats.

The styling of the Avanti has long divided critics, some love the unusual looks and some loathe it, but multiple groups of diehard enthusiasts managed to keep it in production well into the 2000s – decades after Studebaker went bust.

“Space-Age Motoring” – The Arrival Of The Avanti

Breathless advertisements for the Studebaker Avanti began appearing in magazines in 1962 using phrases like “The Maximum Automobile,” “Space-Age Motoring,” and perhaps most memorably, “The World’s Fastest Production Car.” 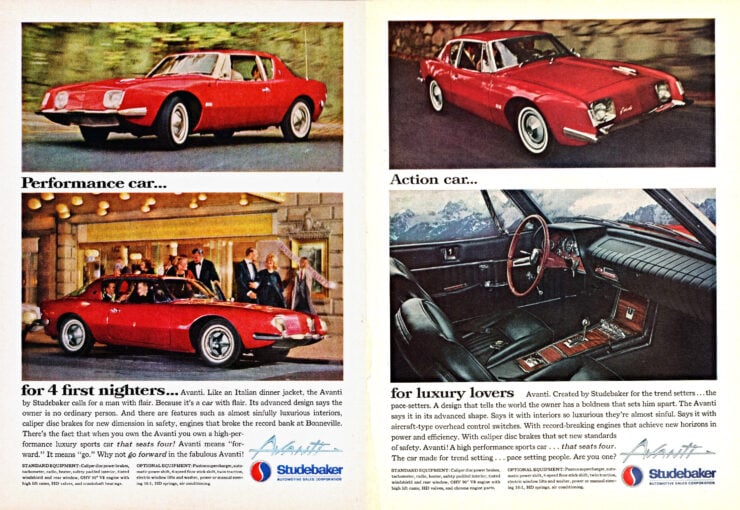 The styling of the Studebaker Avanti has long divided people, the general consensus seems to be that people either love it or hate it with very little room in the middle.

It was clear from the outset that Studebaker were betting their own future on the unusual-looking new four-seater coupe, and they threw everything they had into ensuring it was a success. As it panned out the car itself would become a success, remaining in production decades after Studebaker themselves went out of business.

The styling team for the Avanti was headed up by industrial design legend Raymond Loewy and included Tom Kellogg, Bob Andrews, and John Ebstein– they went from a blank sheet to a completed design in just 40 days.

The team came up with a unique two-door coupe with four seats, a front-engined rear-wheel drive layout, and an usual front end with no grille – it instead used a “bottom breather” intake to get air into the engine bay.

The Avanti was based on a modified version of the Studebaker Lark 109″ convertible chassis and it was given a modified Studebaker 289 Hawk V8 engine mated to either a manual or automatic transmission.

Fiberglass was chosen instead of steel for the body as it would reduce tooling costs and the car’s weight, plus it would draw favorable comparisons with the Corvette which had a body made from the same material. 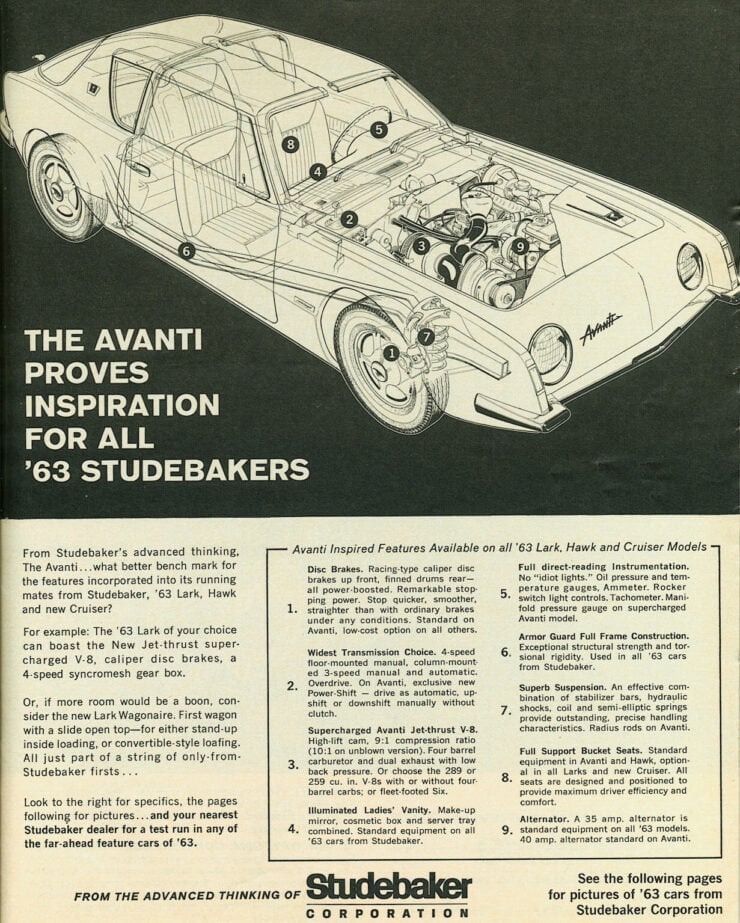 Studebaker made a point of selling the Avanti on its advanced features – features that included optional supercharging if you felt so inclined.

Unusually, a Paxton supercharger was offered as an option on the Avanti, the already powerful 240 hp V8 would be upped to 289 hp with it fitted, and it was a version of this supercharged model that would set the 29 world land speed records at Bonneville.

The Avanti was also given power disc brakes up front with finned drum brakes in the rear, and independent suspension in the front with coil springs and a live axle in the rear on leaf springs – with anti-roll bars front and back.

The curb weight of the car was 3,095 lbs (or 1,404 kgs) and it had similar performance to the Ford Mustang when it was released. Road & Track Magazine managed a 0-62 mph dash in 7.3 seconds onto a top speed of 120 mph in a supercharged R2 Avanti in period.

The Death Of The Avanti – And Its Resurrection

Due to financial issues Studebaker would only build the Avanti from 1962 to 1963 with fewer than 6,000 made. The factory would be closed down and by 1966 Studebaker as an automaker would be no more. 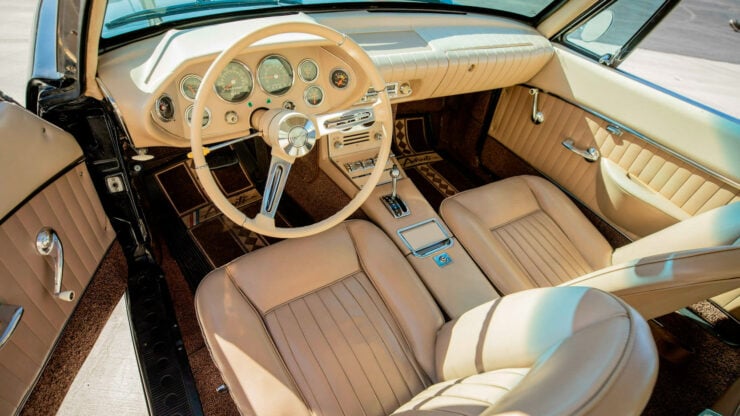 The interior of the Avanti was beautifully appointed by the standards of the time, and it still holds up well today.

This looked like the end of the road for the Avanti but Studebaker dealers Nate and Arnold Altman and Leo Newman bought the rights and tooling to the design, as well as the factory space, and brought it back from the dead.

They called the car the Avanti II it was initially powered by a Corvette 327 V8 however the engine would change multiple times of the production run. The car would remain in production with a number of major restyles over the years including both convertible and four-door versions, until 2006.

The car you see here is an original Studebaker-built Avanti from 1963, the second and final year of production.

It’s finished in glass black with a tasteful cream interior, it has chrome hub caps and bumpers, and it’s powered by the correct 289 cubic inch Studebaker V8 sending power back through an automatic transmission.

If you’d like to read more about it or register to bid you can visit the listing here, it’s due to roll across the auction block with Mecum in the second week of November. 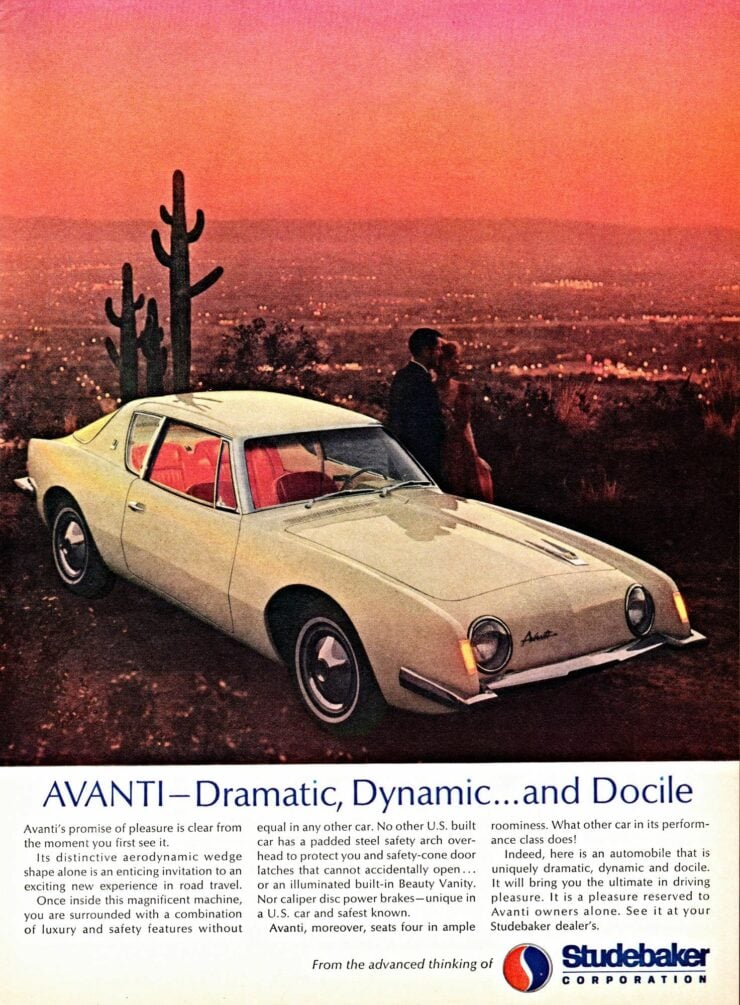 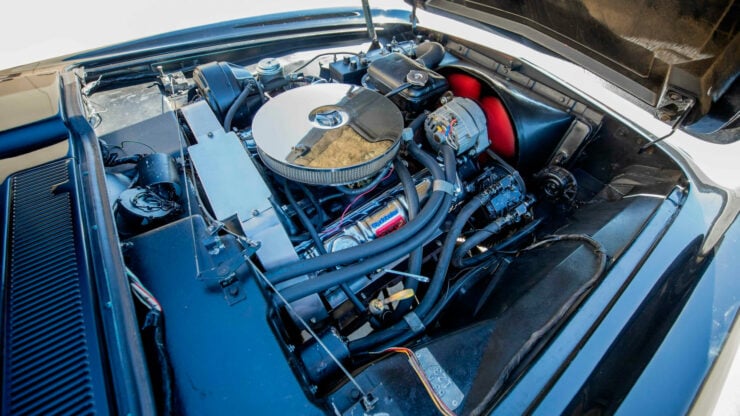 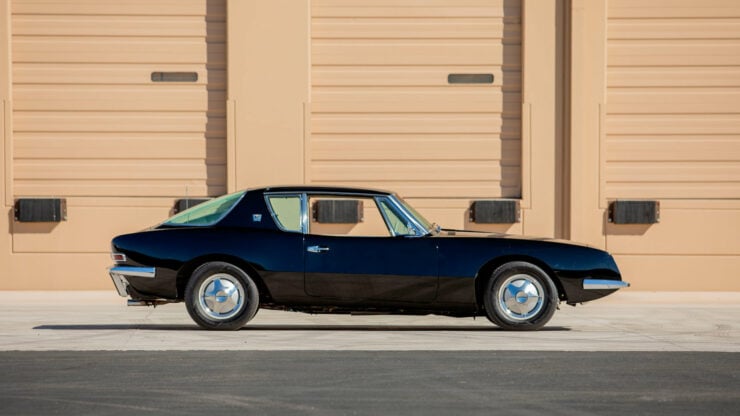 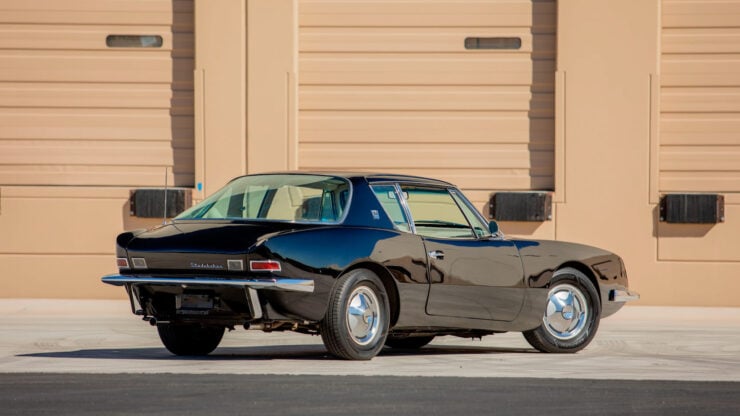 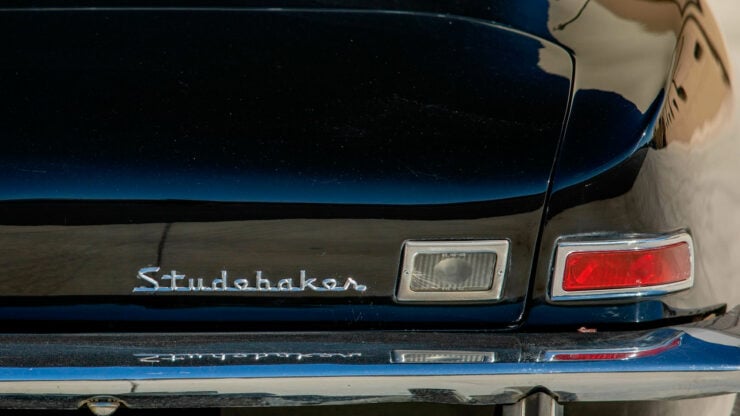 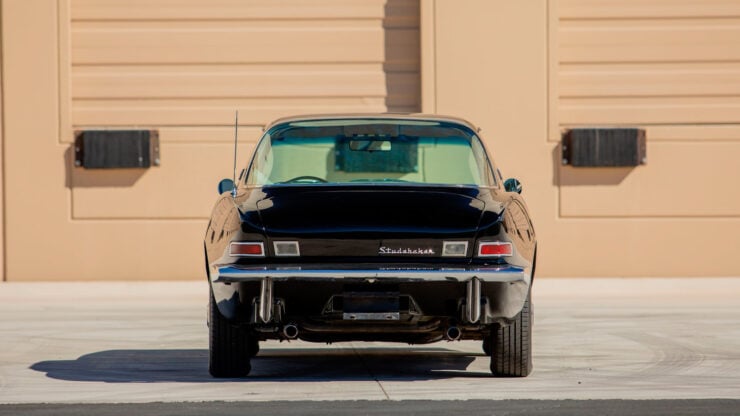 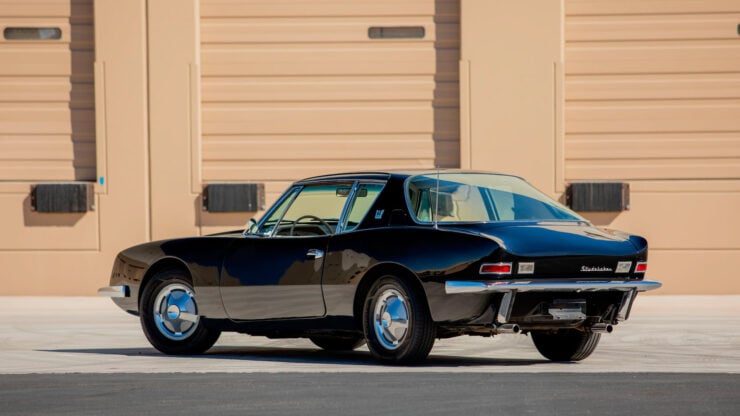 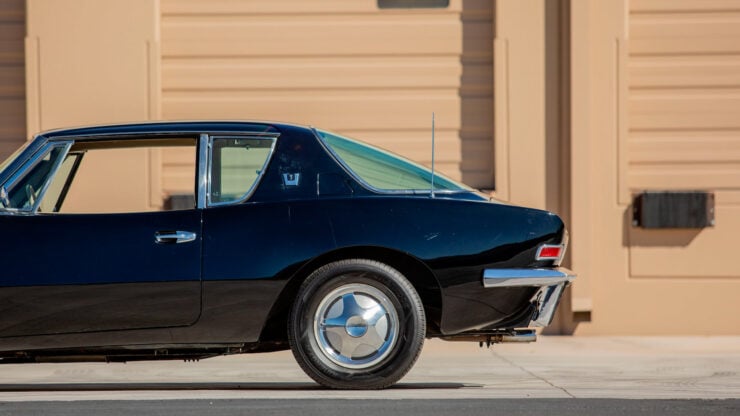 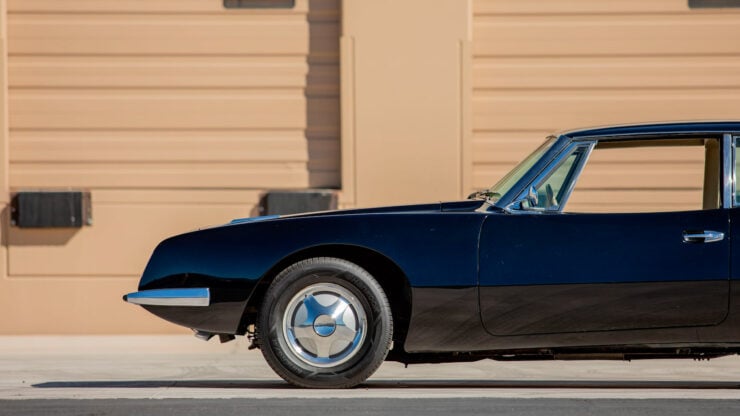 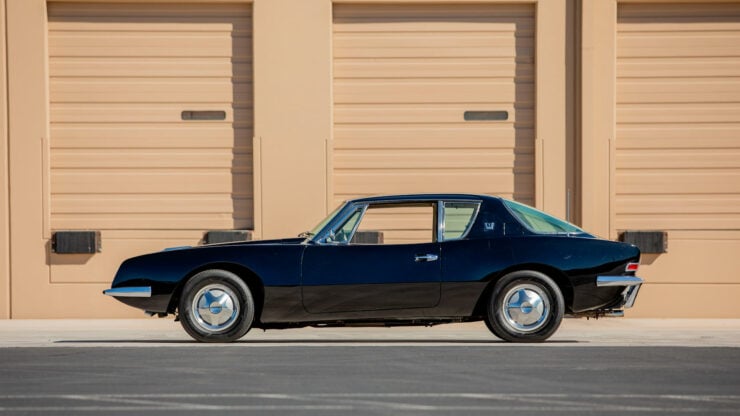 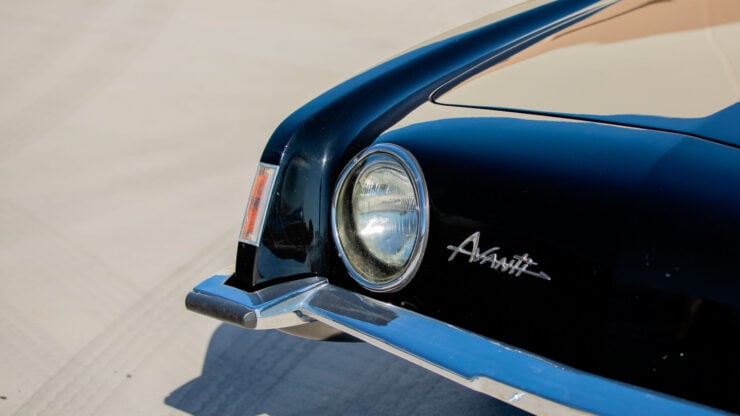 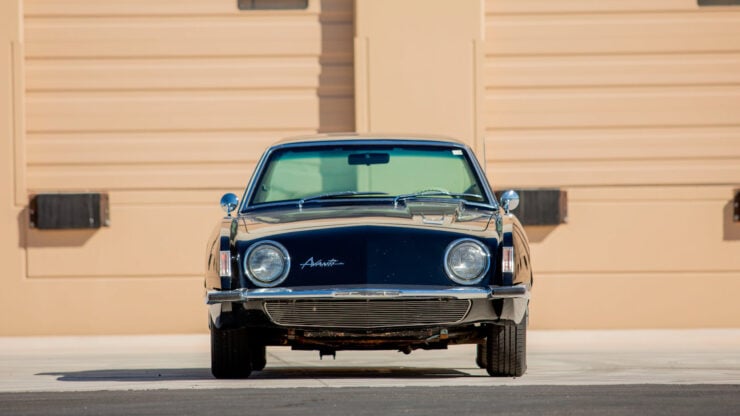 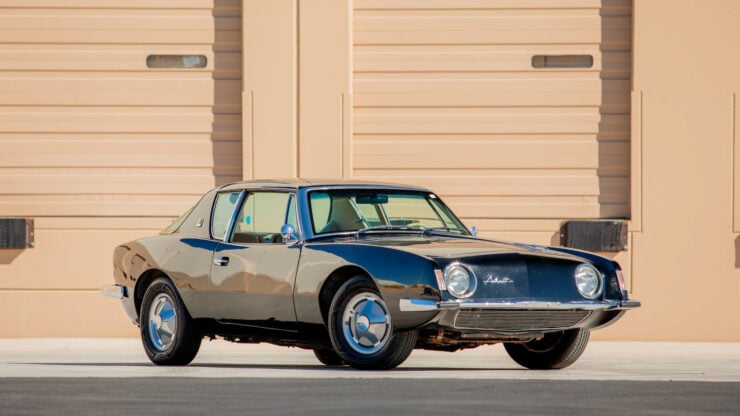 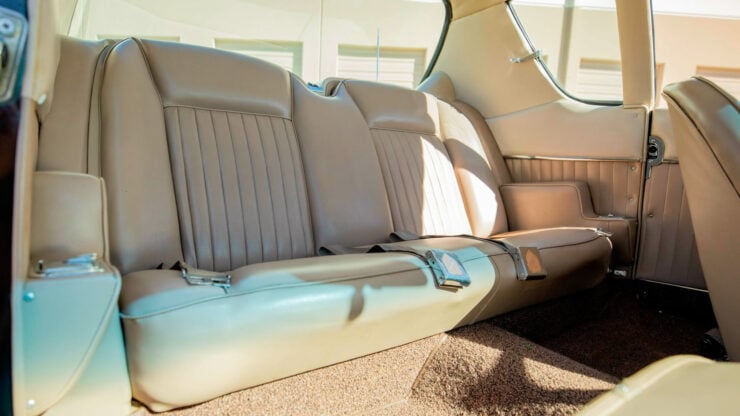 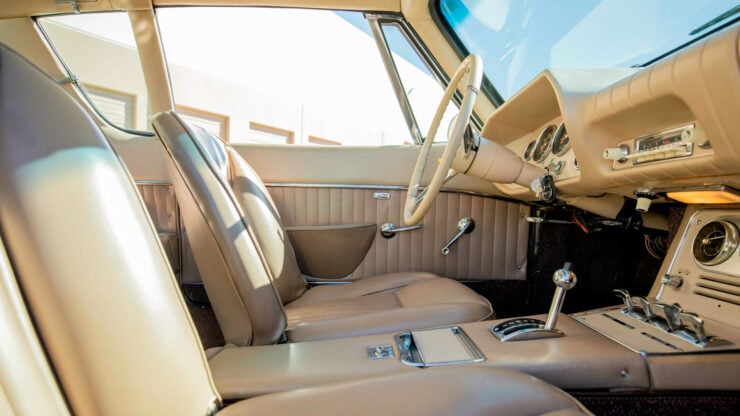 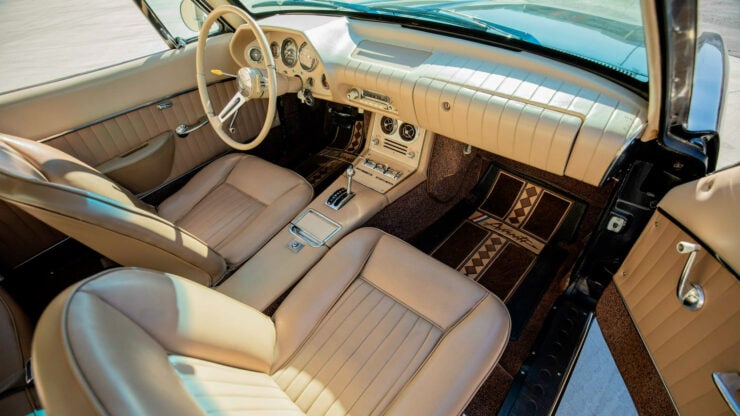 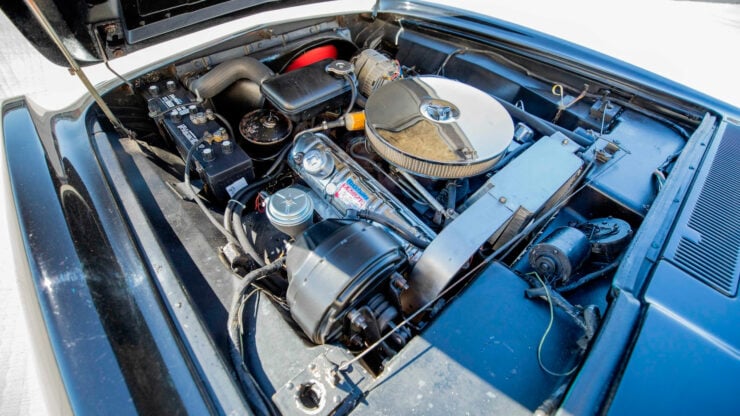