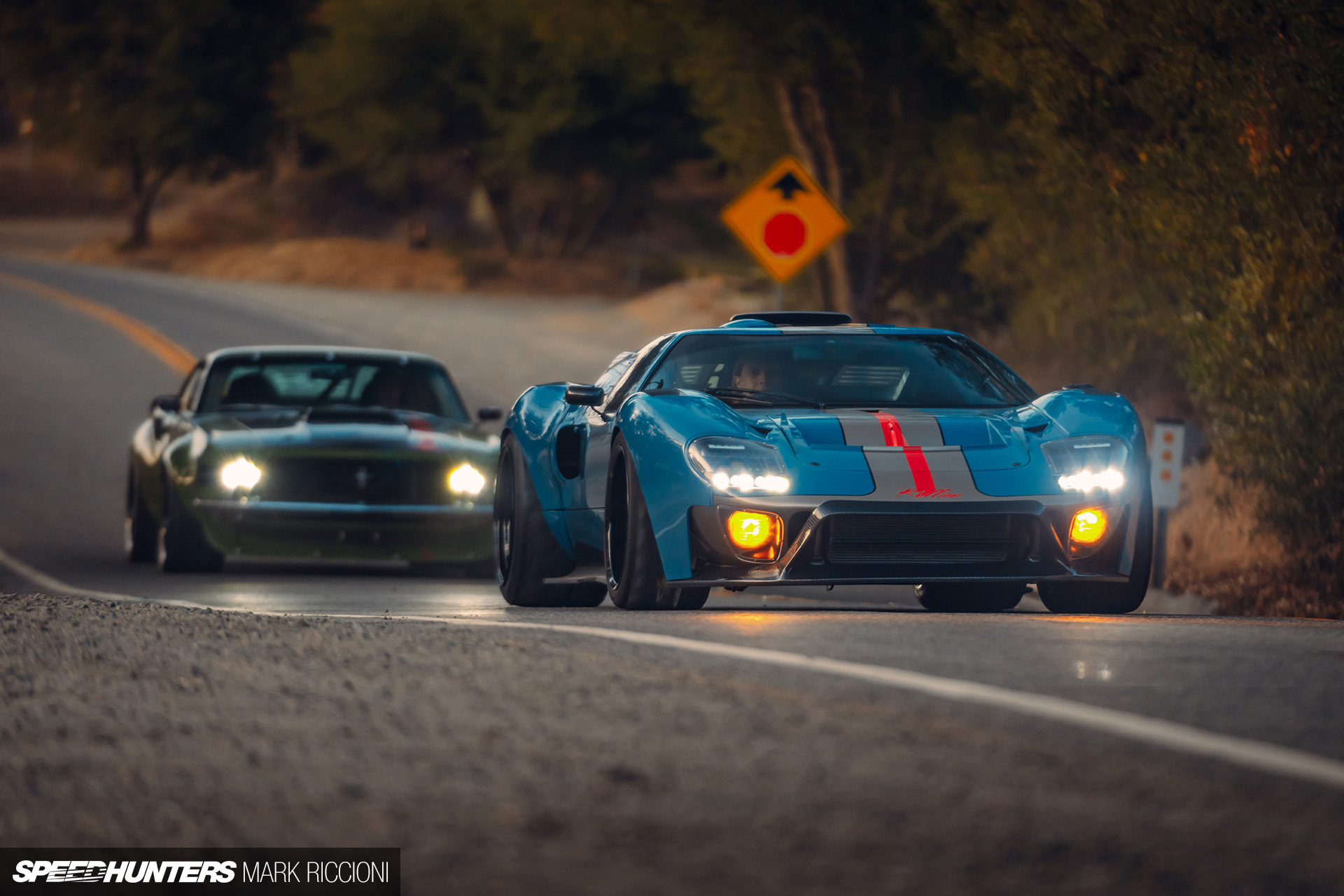 On an otherwise unremarkable night in my office, my mobile went off, pulling me away from some sort of procrastination. Flipping it over it was a message from fellow Speedhunter, Mark Riccioni.

In my experience, Mark is generally good for two things: The first is making all of us feel extremely fiscally responsible and sane through his SH Garage project car updates; the second is shooting some of the coolest automotive projects to hit the internet.

“Got some time, mate?” the message started.“I need you to write about two cars from Chris at Ruffian”.

Two-car features are always a bit of a challenge, especially two-car features where each car can stand confidently on its own. Nevertheless, the glutton for punishment that I am I replied, “Sure, no problem”. Both cars in this instance come from the mind of Chris Ashton.

Chris, prior to building cars, devoted much of his life to digital creativity. As design director and co-founder of Turtle Rock Studios, his handiwork can be found in a number of popular gaming titles. As an on-again, off-again developer myself, I can relate firsthand to the mental release that comes from working in the physical rather than digital. Manipulating pixels and code requires a vastly different skillset than what’s necessary to shape metal.

Yet, therein that difference lies the challenge.

Studying a flat piece of metal and figuring out how to shape it with hand tools can be both fun and incredibly rewarding. Any frustration along the way is only further justified by the satisfaction that comes from being able to run your hands over the finished product.

Stepping back in admiration to exclaim, ‘Yeah, I built that’ never gets old.

Welcome To The Stable

The Mustang was Chris’s first fully custom vehicle so we’ll start there. It’s the reimagining of a 1970 model and its presence is nothing short of impressive. The olive green colour (a Porsche hue) is somewhat reminiscent of the car from Bullitt, but the bodywork screams Trans Am race car.

That’s deliberate because Chris set out to build a race car for the street when he initially tore the Mustang down for its rebuild.

As an autocross enthusiast, Chris didn’t just build the car to look functional, it is functional.

Suspension from Street or Track is used both front and rear. In the front, tubular control arms replace the standard stamped steel units, and the front struts were also shortened an inch to give Chris his desired ride height. At the rear, the Mustang sports a matching Street or Track 3-link setup.

The bodywork quite obviously isn’t stock and the all-steel fenders were made by Chris himself. Construction started with wire templates which were covered in masking tape, and that shape was then created in steel using a planishing hammer. Chris was careful to not change the shape of the fender openings too much, so things don’t look too out of place.

From design to conception each fender took roughly 10 hours apiece. On Chris’s first go no less. Not bad at all.

Chris’s design skills worked wonders on the colour pallet. The satin black wheels match the Boss-style stripe that runs around the bottom of the car, while the red-accented calipers match similar accent striping and lettering throughout.

The red matches the valve covers of the 625 horsepower 427ci LS3 V8 under the hood.

Yes, this car is LS powered. It might be an unforgivable sin to Ford fans, but if it’s any consolation, I don’t think there’s a single blue oval badge on this car.

The year is 2022 and there’s no need to justify an LS swap anymore, but Chris does offer up packaging as a significant contributor to his decision. Coyote motors are roughly six inches wider across than LS motors, and Chris rather likes his factory strut towers.

Backing up the LS is a T56 Super Magnum 6-speed transmission and oil-cooled Ford 9-inch rear end with TrueTrac 4.11:1 gears.

The interior, meanwhile, is elegant in its simplicity.

Save for the OEM-style wood-rimmed steering wheel, the cabin features a mostly a muted colour pallet.

Around the permitter snakes a custom 10-point roll cage, and Corbeau harnesses slide through Cobra seats. For extra occupant safety, there’s a three-nozzle fire impression system, and for comfort, Vintage Air provides climate control. A retro-style control box between the seats houses the various switches for items like the fuel pump, fan and ignition.

Outside of the obvious modifications, Chris has spent time nipping and tucking the car in less initially obvious areas.

The previously faux vents on either side of the headlights are now functional and routed to the car’s air intake system, and the front fenders have been pie-cut to give the car a forward lean. This is both an aesthetic choice and an aerodynamic one, an idea borrowed from Trans Am race Mustangs.

The front chin spoiler is another hand-built effort.

As is the rear spoiler; Chris also taught himself how to TIG weld during its construction.

The Mustang is menacing at every angle and would be enough car for most people to be happy with on any given day. Most people.

Not to be outdone by, well, himself, the other Ford in Chris’s rag is his Superperformance GT40. The Mustang turned out better than Chris intended it to, so it’s really not surprising the GT40 is an absolute weapon as well.

If you can believe it, this build is actually the result of a routine motor and transaxle install that went wrong.

Or right, depending on which side of the fence you sit on. And don’t worry blue oval diehards, this one has GT40 has a Ford engine.

Behind the passenger compartment is a Ford Racing Aluminator 52XS V8, good for 800 horsepower and 445ft-lbs of torque. The headers are equal-length 180-degree units with a vacuum-operated muffler bypass.

Both the headers and intake have been coated bronze, which is the same colour that carries through to the stripe that runs down the center of the car’s exterior.

The intake does a very obvious ‘u’ toward the front, and with the hood on is encased in a custom-made scoop. Scoop one was made of metal and weighed nearly 20lbs, while the version currently on the car is a carbon fibre piece of less than half that weight.

Quad exhaust tips exit through the back bumper where twin tips are more typically found. This was an effort to update the rear end to look a little more symmetrical.

The headlights are another complex exercise in aesthetics and performance. None of the retrofits on the market suited the car, so Chris 3D-modelled his own headlights and then printed them himself. The projector lights themselves are actually designed for Harley-Davidson motorcycles.

You’ve probably already noticed that the car is right-hand drive. What’s rather interesting is that GT40s remain right-hand shift, despite the steering wheel located on the opposite side.

The gauges are Speedhut units, red-faced with a reverse-sweep speedometer.

Like the Mustang, red flourishes inside the interior are matched by red pops on the exterior.

Also, like the Mustang. the Ruffian40 sits on Signature wheels. These are center-lock THREE models in 18×11-inch and 19×14-inch.

The fenders and front spoiler were designed by Kasim Tlibekov and produced in carbon fibre by Competitions Carbon. Without the widened fenders the wheels wouldn’t have a chance of fitting in a way that would leave the car functional.

Toyota aficionados, you’re not mistaken the colour is Cavalry Blue.

Bilstein provides dampers all around with a lift system helping with harsh inclines.

Similar to the Mustang, this car sees its fair share of hard driving. It wasn’t built solely just to park about and look at. It sure is mighty fine to look at though.

Both the GT40 and Mustang feature ‘Ruffian’ in their name and badging. The label was originally used for the Mustang; that project needed a name, and while looking for inspiration Chris noted ruffian was a common name for racing horses.

Sure, that might be a little on the nose, but it fit the ethos of the Mustang; ruffians are rebellious by nature and the car is too. The Ruffian40 simply follows suit.

Modifying both cars as extensively as Chris has can be divisive. Each is beloved in its factory form so many would prefer enthusiasts tread lightly.

Not intending to be a jerk about it, Chris doesn’t seem to particularly care nor mind what detractors might think about his creations. They are the versions of iconic cars he wants to build.

If it wasn’t obvious I’m quite the fan of both.

Chris has the means to have these cars built for him, but he’d rather do it himself to stay true to his vision. So much so that he’s now grown Ruffian Cars into an operation that has outgrown the garage in which it started.

The setting may have changed slightly but Chris is still learning as he goes. Now he just has a few other folks learning with him.

Their next effort will be a track-ready Ford Galaxie 500. That’s over 3,500lbs of Ford to make into a track vehicle, so consider my interest well and truly piqued.