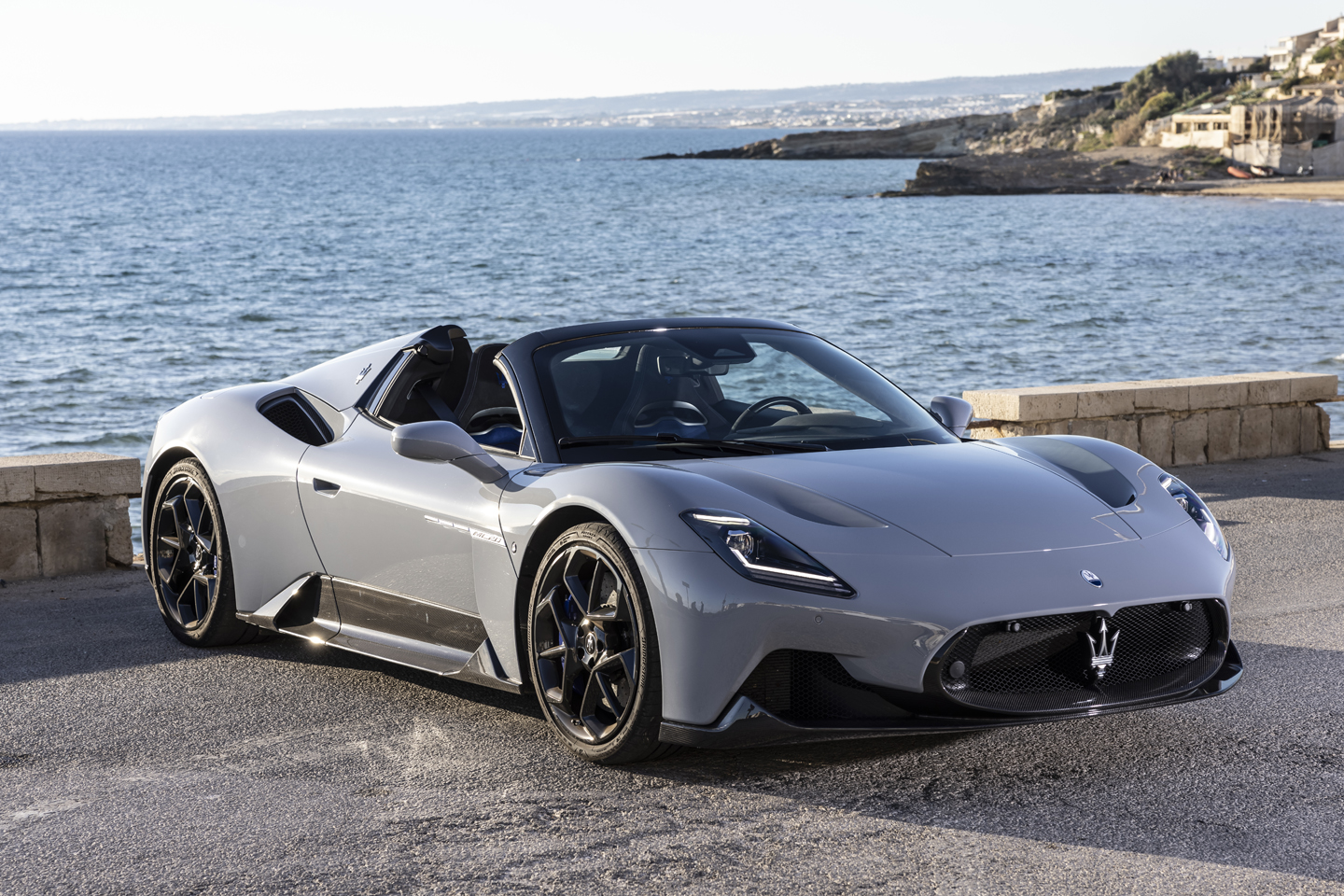 In the grand list of things COVID messed up the cancellation of the original Maserati MC20 Coupe launch doesn’t feature prominently. But it does mean I haven’t driven any version of the mid-engined Maserati prior to getting into the open-topped Cielo for the first time. Based on the way it looks and the potency of its performance numbers I was expecting a wannabe supercar, shouty and aggressive. The reality is much more subtle than that, and much more compelling.

Okay, so subtle is an odd word to apply to any car with gullwing doors and an XL Maserati trident graphic stuck to the rear engine cover. Named after the Italian for sky, the Cielo’s basics are as supercar-y as the coupe version, with a carbon fibre monocoque and composite bodywork, a limbo low seating position and with a narrow door aperture and broad sill making it hard to achieve an elegant entry or exit with the roof in place.

Inside the cabin tells the same story – functional and solidly finished with lots of Alcantara and carbon fibre, but it definitely isn’t going to be confused with a luxurious grand tourer. And that’s before you consider the dinkiness of the 100-litre luggage compartment behind that mid-mounted engine, one guaranteed to slow cook any bags entrusted to it for any length of time. 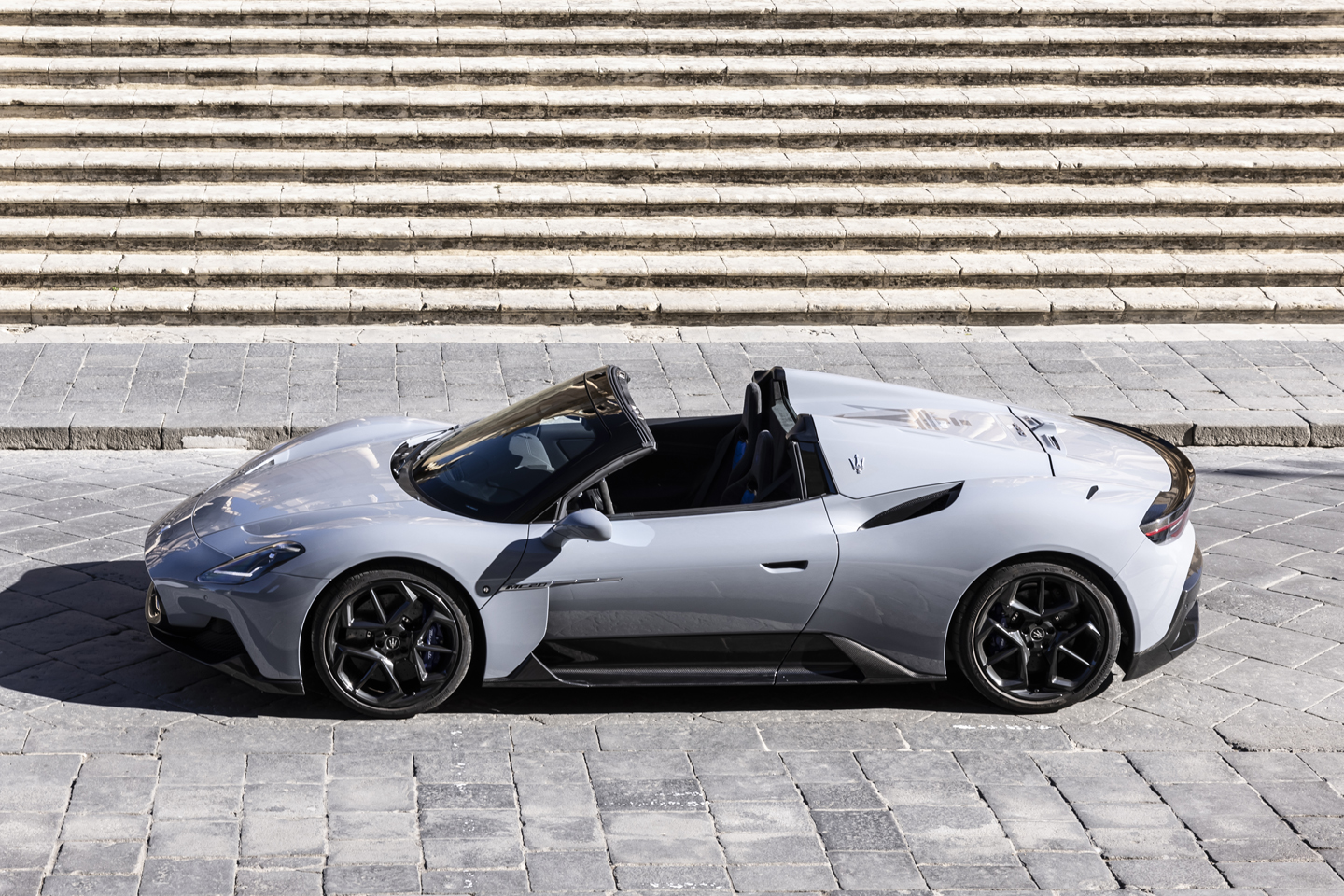 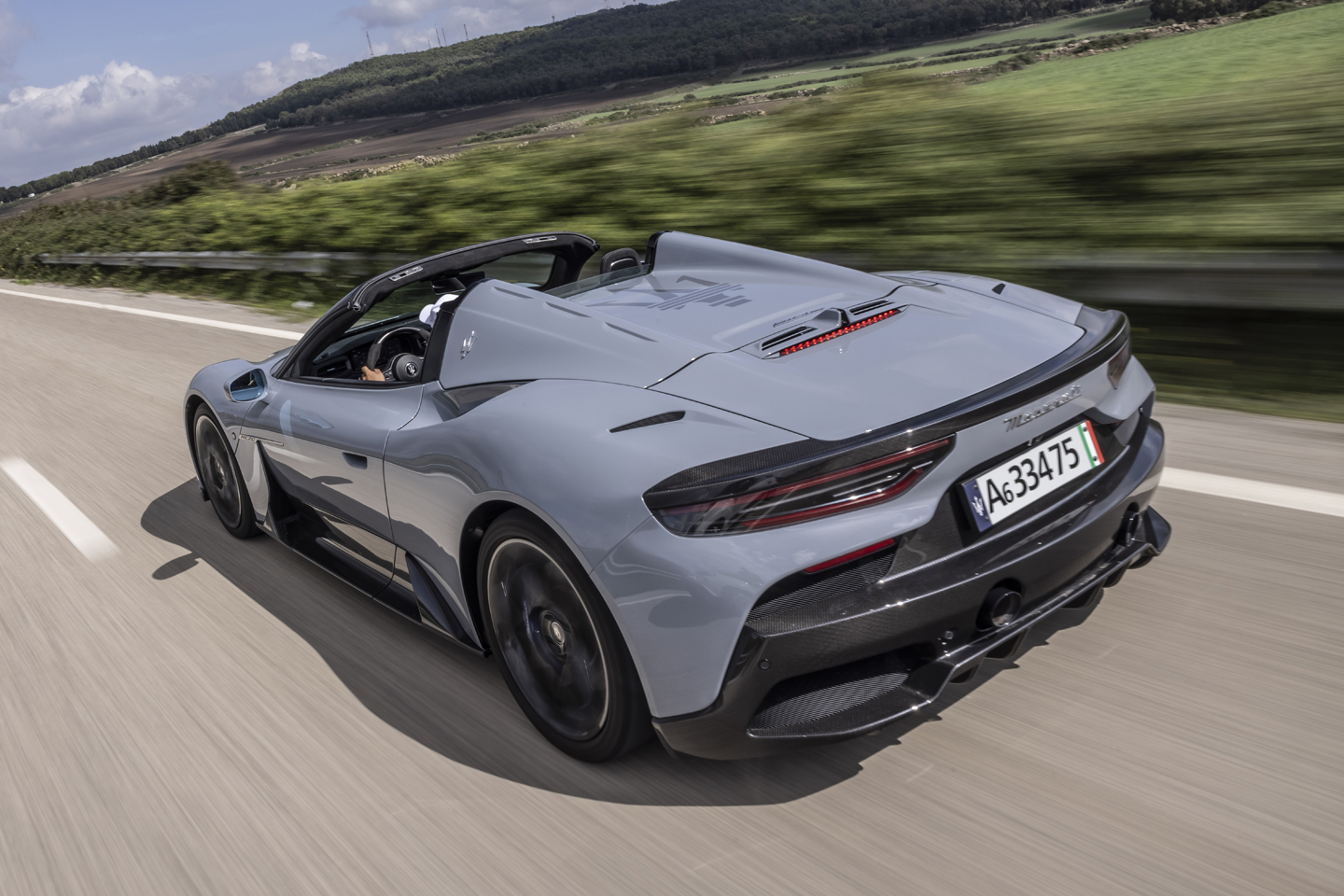 The engine is where the narrative takes a swerve, because the Cielo’s powerplant is definitely more sports car than supercar. Maserati’s dry sump ‘Nettuto’ V6 features a novel pre-ignition system and, thanks to the twin turbos’ ability to create boost pressures of up to 3 bar, or 43.5 psi, it squeezes a hugely impressive 621hp from just three litres of swept capacity. But it doesn’t deliver this like the high-bred engines of junior supercars, being rorty and raucous and with a power delivery that is more iron fist than velvet glove. On Maserati’s numbers, the Cielo’s 1,560kg kerbweight makes it 65kg heavier than the Coupe. Claimed performance is the same, with a 2.9-sec 0-62mph, 9.2-sec 0-124mph and a 199mph top speed.

The Cielo’s folding roof is the obvious difference between the two versions of the MC20, but it’s one that can be covered off quickly. It works exactly as expected, folding away quickly and unobtrusively when ordered to do so – the whole process takes just 12 seconds, and can be operated at speeds of up to 30mph. With the roof in place the cabin feels impressively snug, and with it stowed under the rear deck the Cielo turns predictably breezy, although with a rear glass air deflector minimising buffeting when raised.

Grumble one: roof operation is controlled by the central touchscreen, requiring the activation tab to be pressed throughout the whole cycle. Maserati’s engineering team say that integrating this function into the UI was harder and more expensive than just fitting a switch would have been. Which, officially, makes it 100 per cent the wrong decision: a physical control would both feel vastly nicer and be operable with eyes still on the road. On the plus side, the roof’s standard electro chromatic dimmable glass panel works quickly and looks good, even if the difference between its light and dark settings isn’t actually very great. 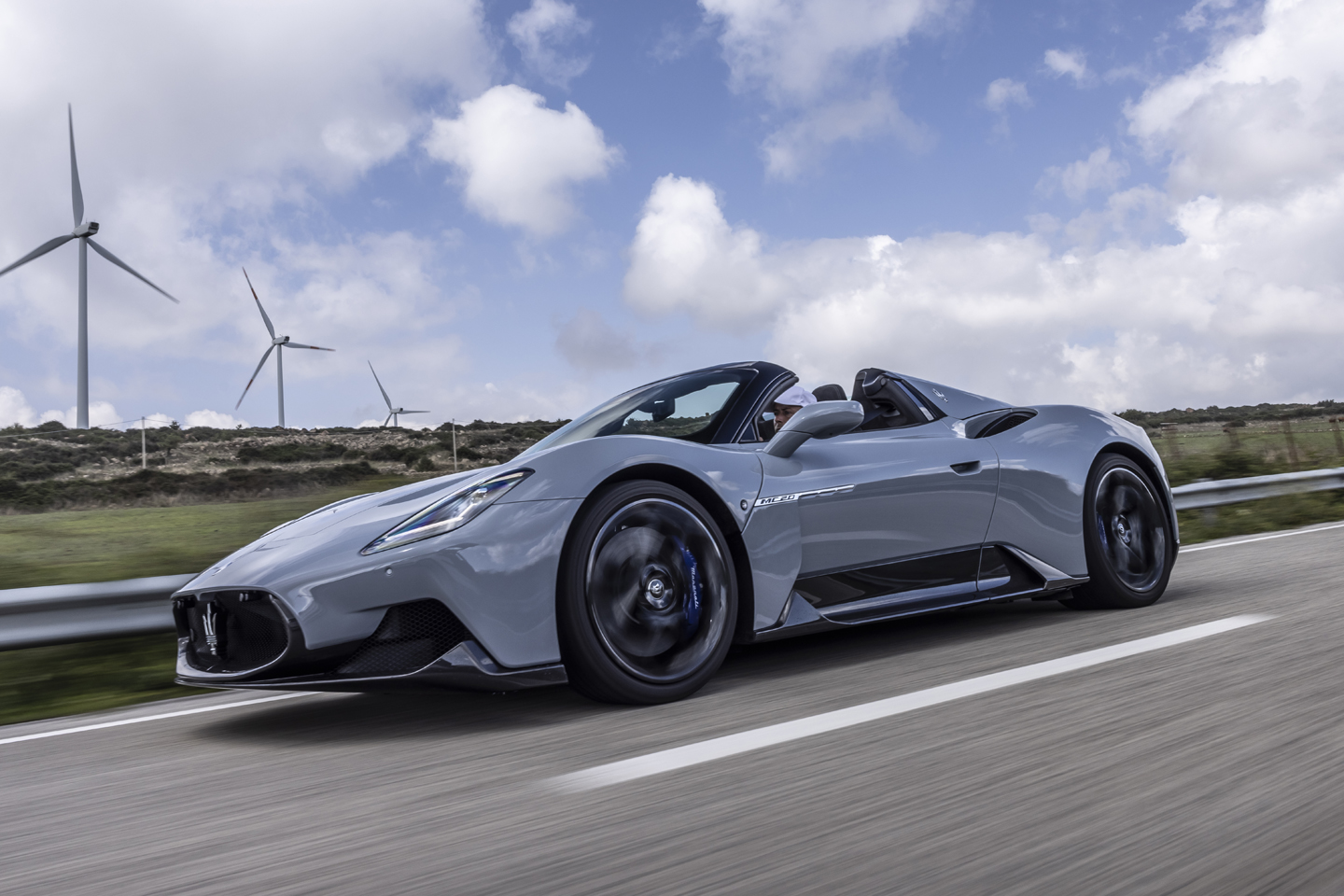 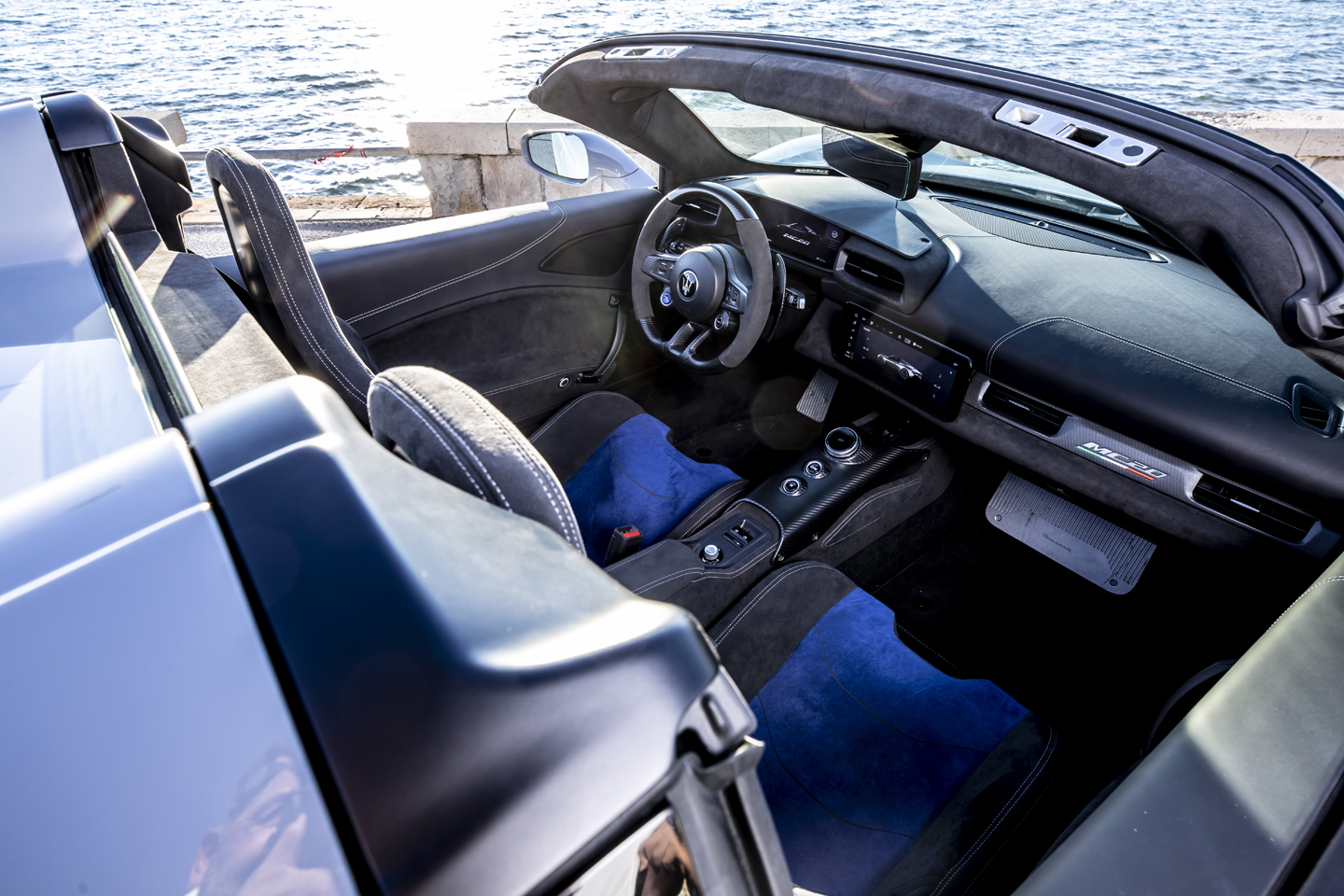 Like the Coupe, the Cielo has three dynamic modes – GT, Sport and Corsa – with the ability to choose different two different damper strengths in each of them. GT defaults the chassis to Soft but can be turned to Mid, Sport starts in Mid but can be toggled to Soft, and the punchiest Corsa brings Hard, but can be backed off to Mid. The circular controller that controls these modes on the centre console has a round digital display which is hard to see in direct sunlight, but the changes it brings are both obvious and profound.

So in GT mode with the gearbox left in Drive the MC20’s twin-clutch transmission changes ratios with the gentleness of a good torque converter, while the suspension feels impressively plush – even over the many bumps of the pockmarked Sicilian roads I drove the car on. Selecting Sport firms the chassis without turning it harsh, while adding more bite to the top of the throttle pedal’s travel and much more snap to the gearchange. While the fully hardened dampers were too much for Sicily’s scarred Tarmac, the ability to back them off while still enjoying Corsa mode’s engine theatricality and neck-nodding torque bumps on every upshift.

The MC20 feels much friendlier in the real world than anything this low and fast has any right to. Steering is high geared but resists kickback over bumps, responses are keen and the Cielo is happy to both hold onto a line and to adjust its attitude in response to small throttle inputs. The Bridgestone Potenza Sport tyres were better at delivering lateral acceleration than longitudinal Gs. In tighter corners the rear tyres could be felt fighting to find adhesion, with the ESP’s more permissive Sport mode allowing this scrap to be pushed into some progressive low-speed oversteer. But even being deliberately over-driven – in the interests of scientific discovery – it didn’t feel snappy or scary in what is clearly meant to be a feel-like-a-hero mode. 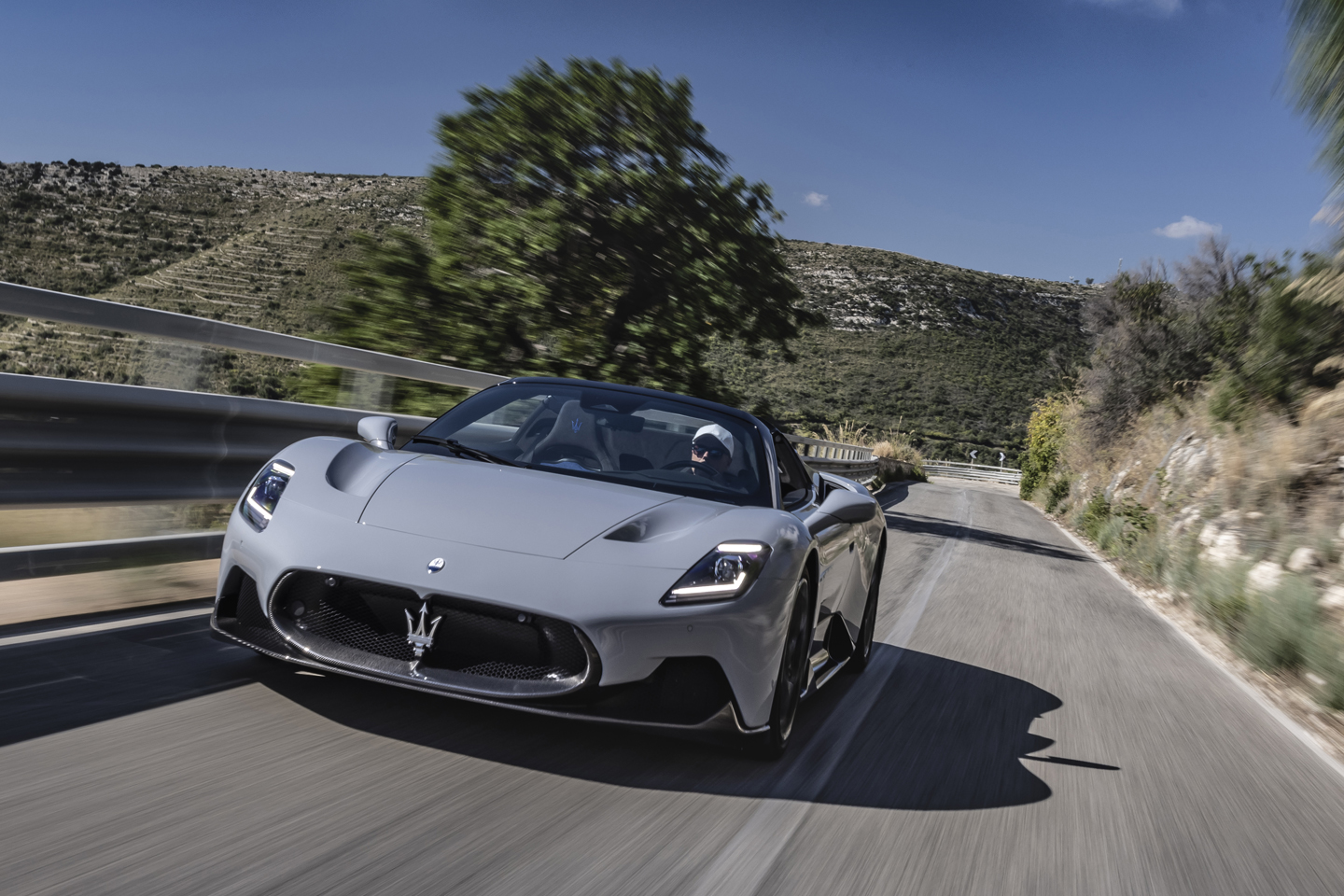 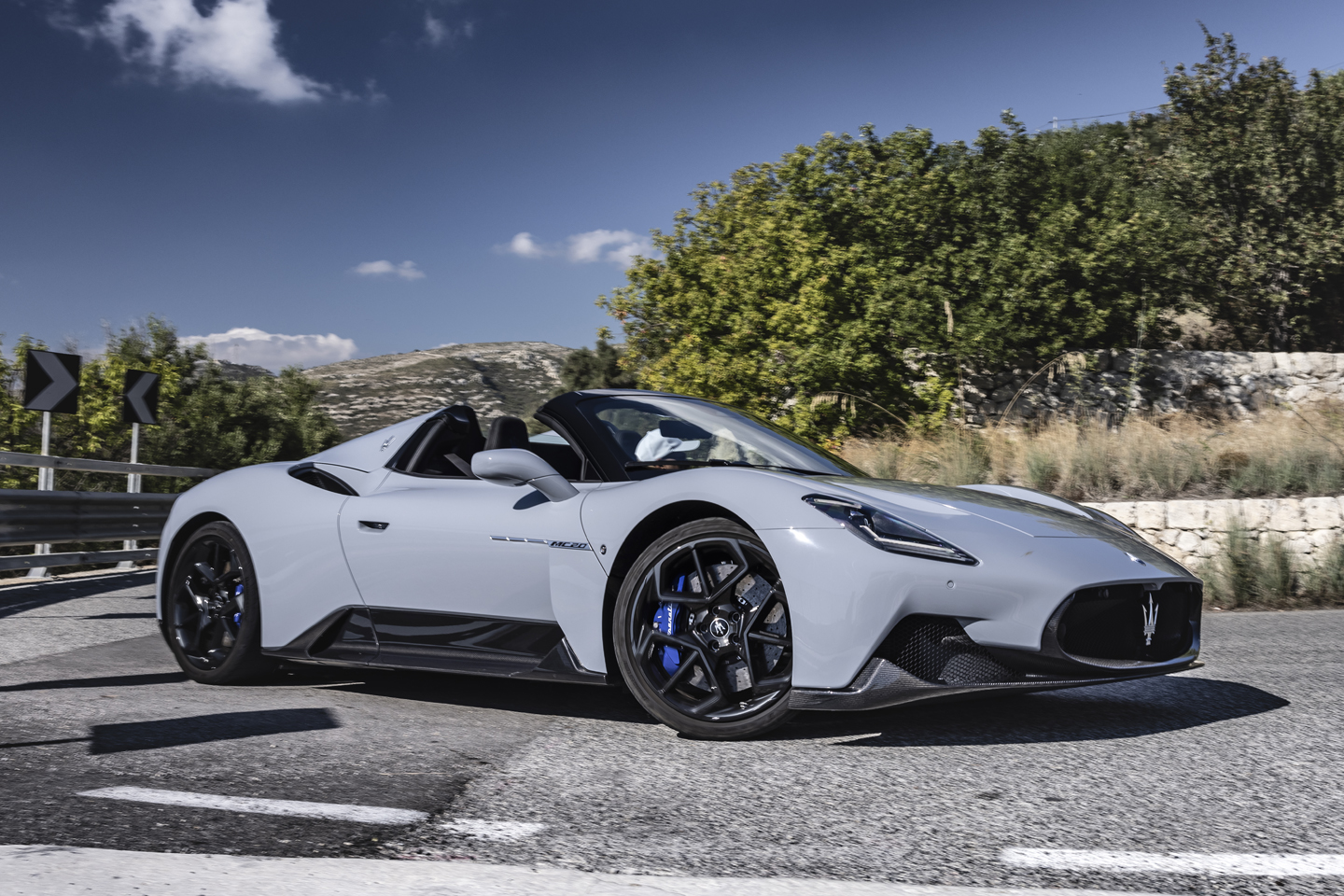 High-speed stability is excellent. Sicily’s highest speed limit isn’t anywhere near the Cielo’s capabilities, but Maserati’s admission that the island’s speed cameras have been hunted to extinction – and the blatant encouragement of other road users – meant the Cielo was often pushed a little harder. Let’s just say that if you did need to cross Germany in a hurry on a quiet Autobahn network, the MC20 would be an excellent way to do it.

Yet the charismatic engine is definitely the highlight, largely because of its fearless honesty. Maserati has made no attempt to hide its very turbocharged nature. There is lots of low-down lag and building boost brings the noise of rushing induction, with a wastegate hiss every time the throttle is eased. The breadth of the V6’s mid-range muscle means there is never any need to chase the limiter; shifted flat the Cielo feels very nearly as quick when changing up at 6500rpm as it does holding on for the 8,000rpm redline – although the top-end exhaust rasp gives extra encouragement to take it all the way. No, it’s not especially polished, but it is hugely compelling. If Stellantis built another Lancia Stratos it would definitely be powered by a Nettuno V6.

Okay, I did have a few more gripes. The fatness of the MC20’s A-pillars creates some alarmingly substantial blind spots, especially when heading into roundabouts. The matt effect carbon fibre of the interior is the genuine article, but looks almost exactly like the low-rent carbon-effect plastics that were popular a few years ago; a varnished gloss finish would look far classier. Buying the Cielo also denies the chance to see the engine through a glass panel as on the Coupe, too. A really harsh critic might also find the design at the rear and the XL tailgates to look a bit dull when compared to the much more confident styling at the front. But overall this is an exceptionally good-looking car. 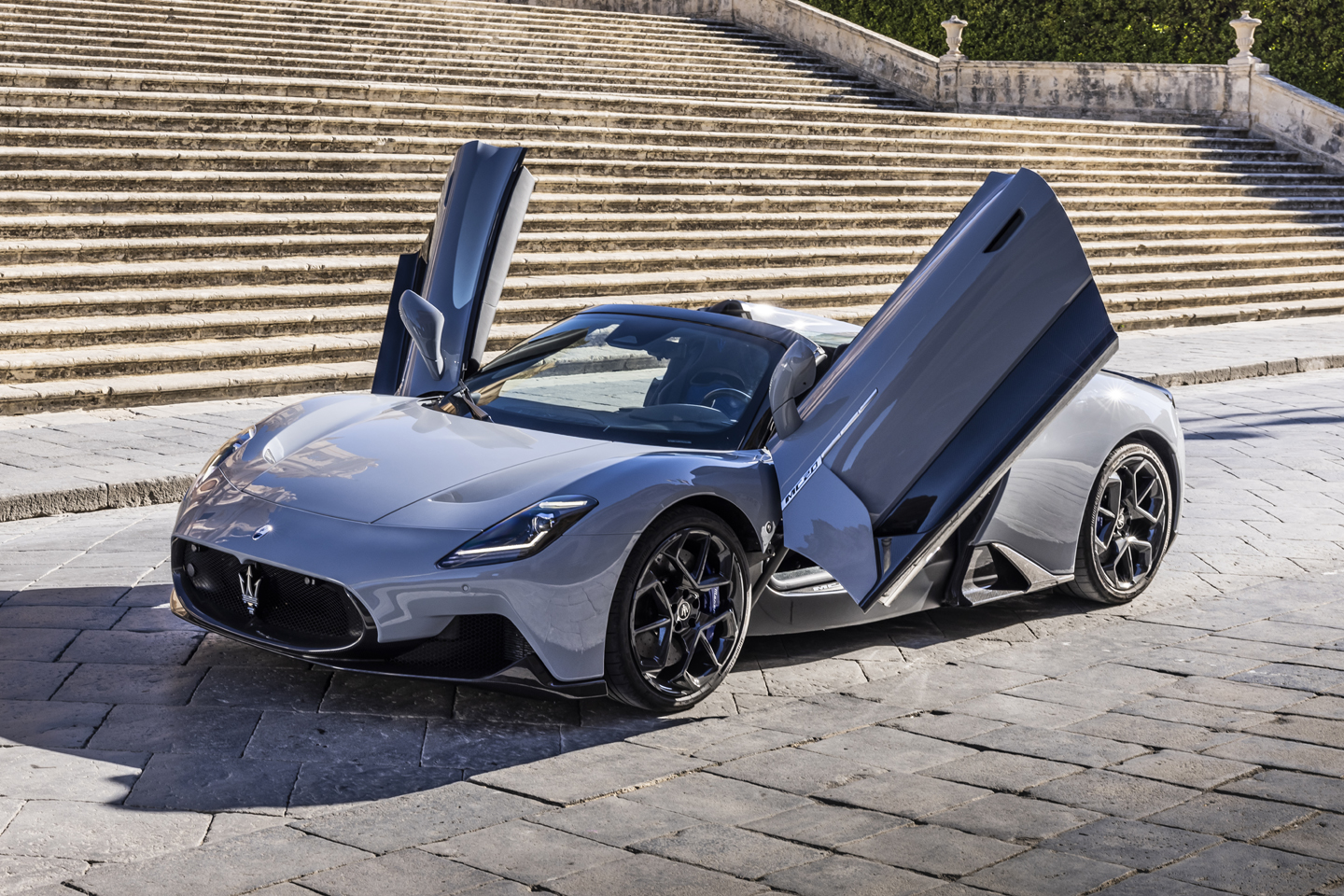 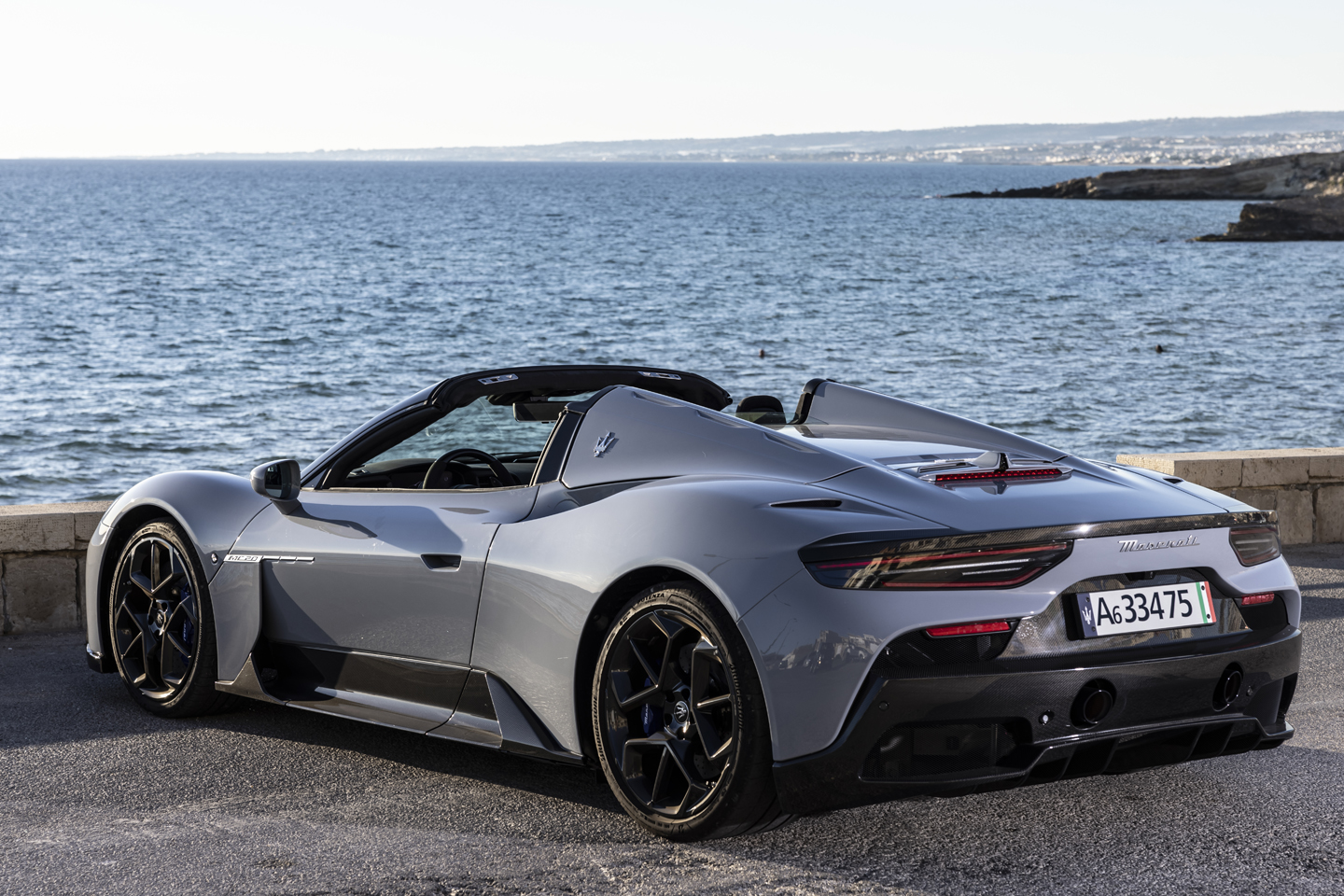 Both visually and dynamically the MC20 is the most exciting Maserati for a generation – and on first impressions, the Cielo feels like it will be a very easy choice to make given its breezy charms and the minimal loss in performance over its fixed roof sister. Beyond it, Maserati is already working on a fully electric MC20, with the forthcoming Folgore set to use a triple motor set-up we’re promised will deliver even more savage performance than the Nettuno.

The MC20 is a round peg in a world of square holes, with the Cielo’s outline £220,000 price making it more expensive than a 911 Turbo S Cabriolet and only slightly cheaper than a Ferrari F8 Tributo Convertible or McLaren 720S Spider. It might lack the ultimate polish of any those rivals, but it definitely doesn’t feel like a poor alternative. In fact, it’s hard to think of another choice in this part of the market that can get close on real-world drivability or charisma.