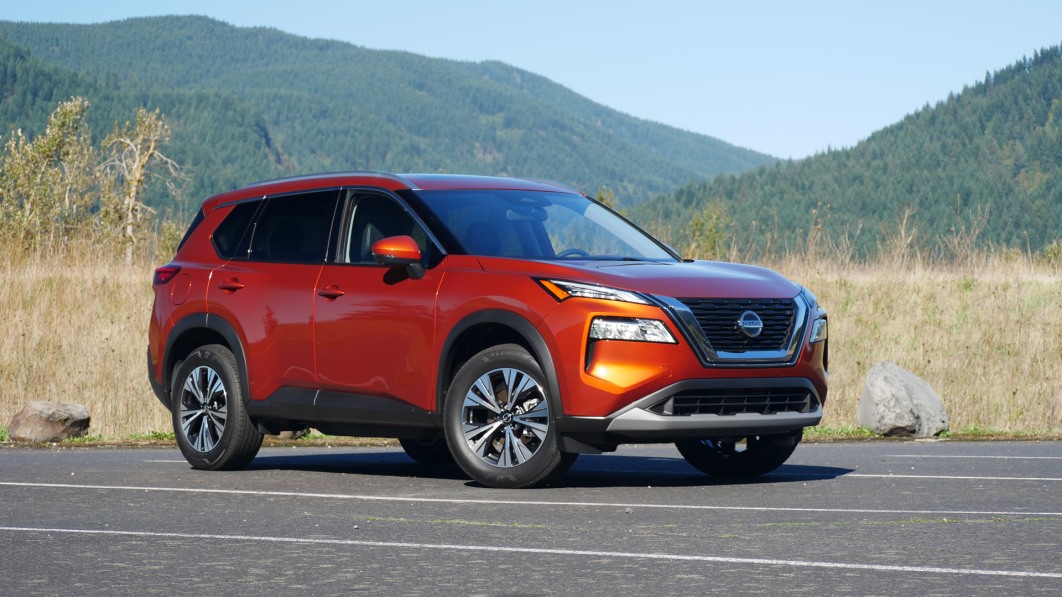 Better late than never, as they say. The 2022 Nissan Rogue sees an all-new engine introduced, only one year after everything else about Nissan’s compact SUV was totally redesigned. That’ll be disappointing news to everyone who got a Rogue last year, but terrific news for those considering this 2022. And you absolutely should consider the 2022. It’s far better to drive than its rather dreary predecessor, and the new 1.5-liter turbocharged three-cylinder makes it even better. Yes, three cylinders. Don’t worry, it’s hardly the only such engine out there, and the odd number (literally and figuratively) actually gives it a charming little character.

The rest of the Rogue stands out with its compelling design inside and outside. The interior in particular is one of the segment’s finest efforts, especially (and perhaps obviously) in upper trim levels, where padded and stitched simulated leather covers the dash, doors and center console. You also get well-executed if unremarkable infotainment tech, decent storage, and interior space that falls just a little short of the class big boys (Hyundai Tucson, Kia Sportage, Toyota RAV4 and Honda CR-V). In most respects, we think the Rogue is overshadowed by those (largely because it does not offer a hybrid powertrain), but it’s fully competitive and worth a look.

The Rogue gains very welcome improvement under the hood for 2022. The 1.5-liter turbocharged inline-three joins an updated CVT with lower and higher ratios to produce a much better Rogue to drive. 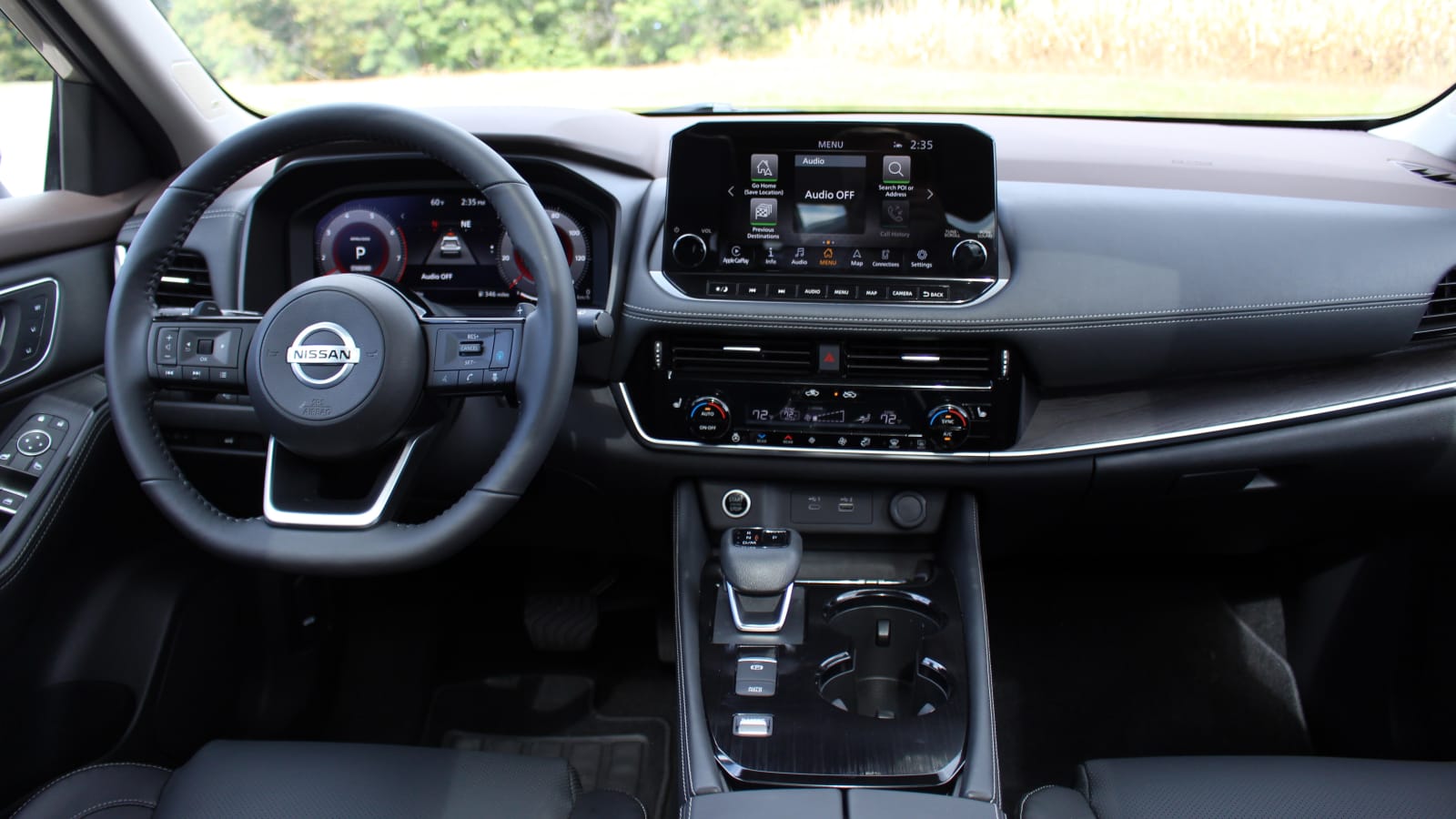 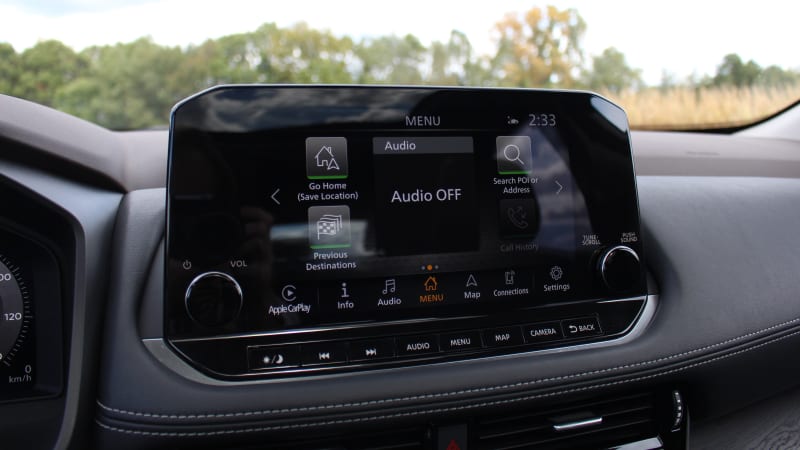 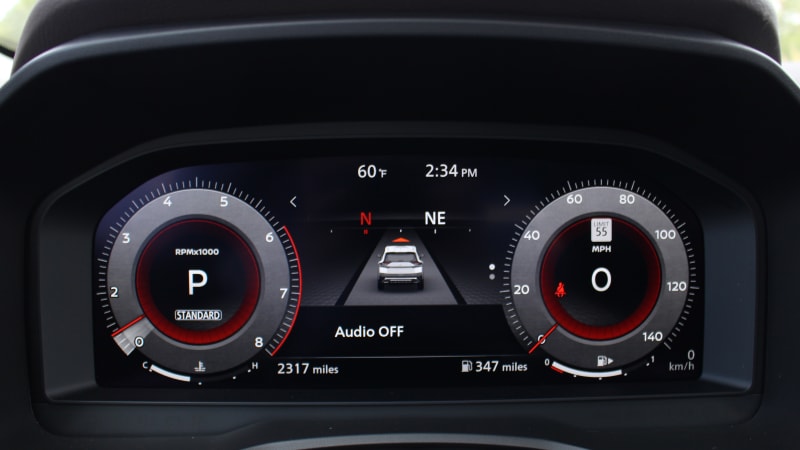 What are the Rogue interior and in-car technology like?

The best element of the Rogue is its interior, which is right at the top of its class in both design and quality. A number of two-tone interior color combinations are offered, but even an all-black SV tester featured a weave-like pattern to the leatherette upholstery that nicely spruced things up. Even the open pore “wood” on the Platinum is convincing to the eye, if still fake. That top trim (pictured below) is also adorned with contrast stitching on the doors, dash and the seats. The latter of which are covered in semi-aniline leather and feature Nissan’s incredibly comfortable “Zero Gravity” seat design front and rear.

The dash and center console consist of a pleasing combination of digital screens and physical controls. An 8-inch infotainment touchscreen is standard, but the top Platinum trim gets an upsized 9-inch screen. Apple CarPlay and Android Auto are standard with both screens, but the 9-inch screen comes with wireless Apple CarPlay. Lower grades get an analog instrument panel with a 7-inch display in the center (no complaints with either), but the Platinum trim comes with a fully-digital 12.3-inch panel that’s easy to read and moves through the various screens and menus quickly via steering wheel buttons. A large head-up display comes paired with the fully digital instrument panel, too. Other available features we like include a panoramic moonroof, tri-zone climate control and wireless phone charger. 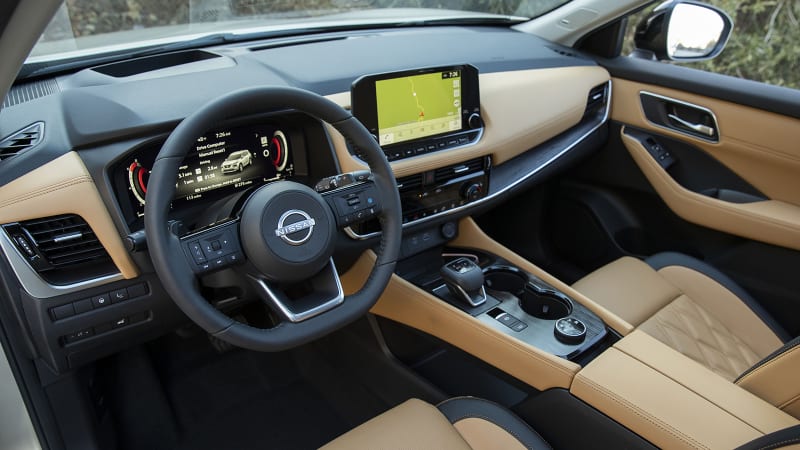 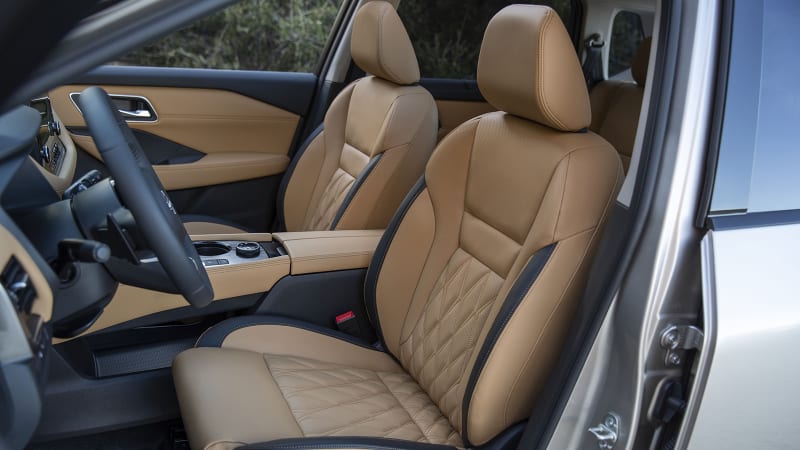 How big is the Rogue?

The Rogue measures up well versus other compact crossovers. It has one of the more passenger-friendly back seats in the segment, one that measures up with the RAV4, CR-V, Tucson and Sportage. We found there is plenty of room for a rear-facing infant car seat and there is a LATCH anchor in the middle position (unlike the last Rogue), but the anchor points were not big enough to accommodate our Gracco car seat’s clips. As always, we’d recommend bringing along your own car seat on a test drive.

Maximum cargo capacity (second row dropped) is up to 74.1 cubic feet, a number that barely trails the class best. Space behind the raised second-row comes out to 31.6 cubic feet, which we found to be a very useful amount. Still, it also couldn’t fit quite as much as the Tucson, CR-V and RAV4. However, we tested a Rogue (pictured below left) without the innovative and useful “Divide-N-Hide” cargo floor (below right). Besides increasing cargo volume to 36.5 cubic feet, it consists of two movable floorboards — keep them in for a flat floor; remove them for additional depth, or arrange them into a stacked formation to divide the cargo area into separate parts. A new milk gallon holder aft of the wheels is built into the cargo area floor, so now your gallon of milk, water or whatever won’t annihilate the rest of your groceries on the way back from the store. 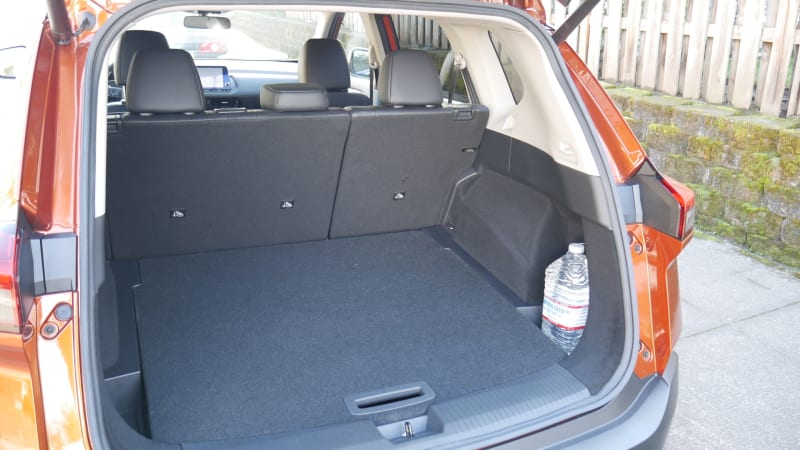 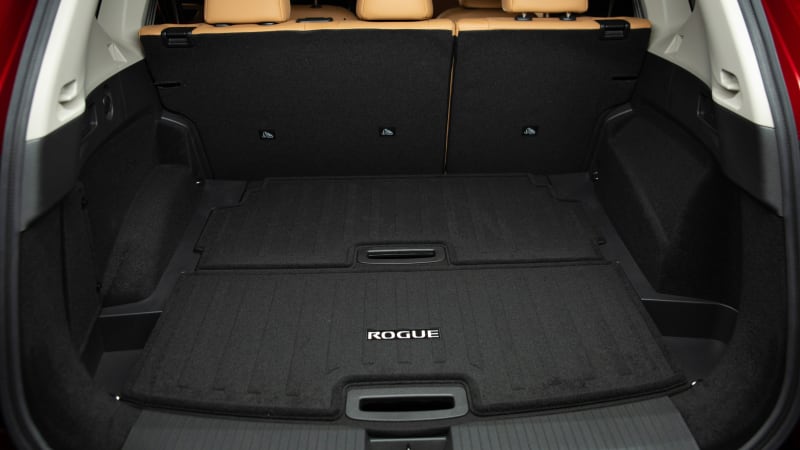 What are the Rogue fuel economy and performance specs?

For 2022, the Rogue is only available with a 1.5-liter turbocharged inline-three that produces 201 horsepower and 225 pound-feet of torque. These figures gives the Rogue one of the strongest standard engines in the compact SUV segment as opposed to one of the weakest. Front- and all-wheel-drive versions are available, but every Rogue still has a continuously variable transmission standard.

Unfortunately, there is no Rogue hybrid or plug-in hybrid. 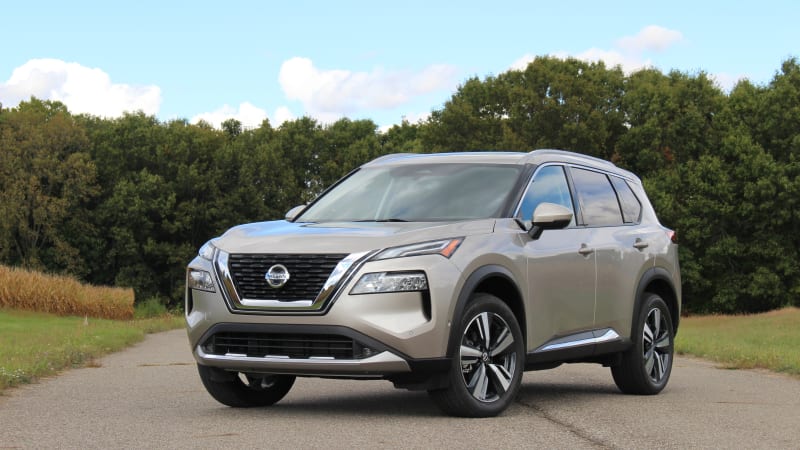 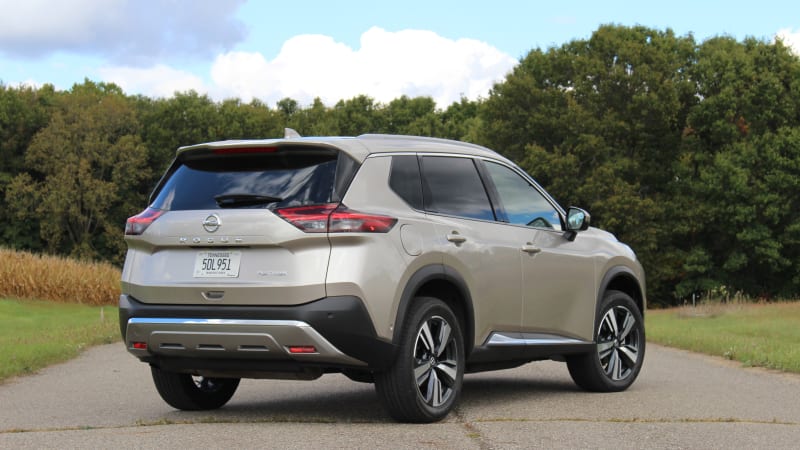 The Rogue was already massively improved after being overhauled last year, and the new engine for 2022 is the ingredient that was sorely missing from the recipe (we described the old engine as “a total bore”). One of the big surprises is that the engine actually sounds smoother than the four-cylinder from which it’s derived. Power delivery is mighty smooth, too. The turbo spools up fast and gives you easy-to-use down-low torque, especially around town. Like many small turbo engines, though, it starts to lose steam when revs rise as you accelerate hard up an on ramp, for instance.  As for the CVT, it’s still not particularly impressive, but does the job fine. It’s programmed to act like a conventional automatic transmission, and ratio changes are silky. It doesn’t react quickly, though, such as when you ask for a kick-down for passing or hitting an onramp.

Nissan has tuned the Rogue for comfort, and it shows. This crossover rides admirably over bumps, highway frost heaves and potholes. It’s not luxurious, but it’s up to par for the segment. And even though engine noise is down, wind noise is still annoying at highway speeds. Where the previous Rogue was a noticeably poor driver, this new Rogue is competent and melts into the background without wowing or annoying us. That said, the steering still has zero feel, and the handling in general is mediocre. It’s perfectly acceptable, but if you want to be engaged as a driver, many competitors remain a better choice.

What other Nissan Rogue reviews can I read?

Dig deeper into the new engine for 2022 and how it dramatically improves the Rogue. 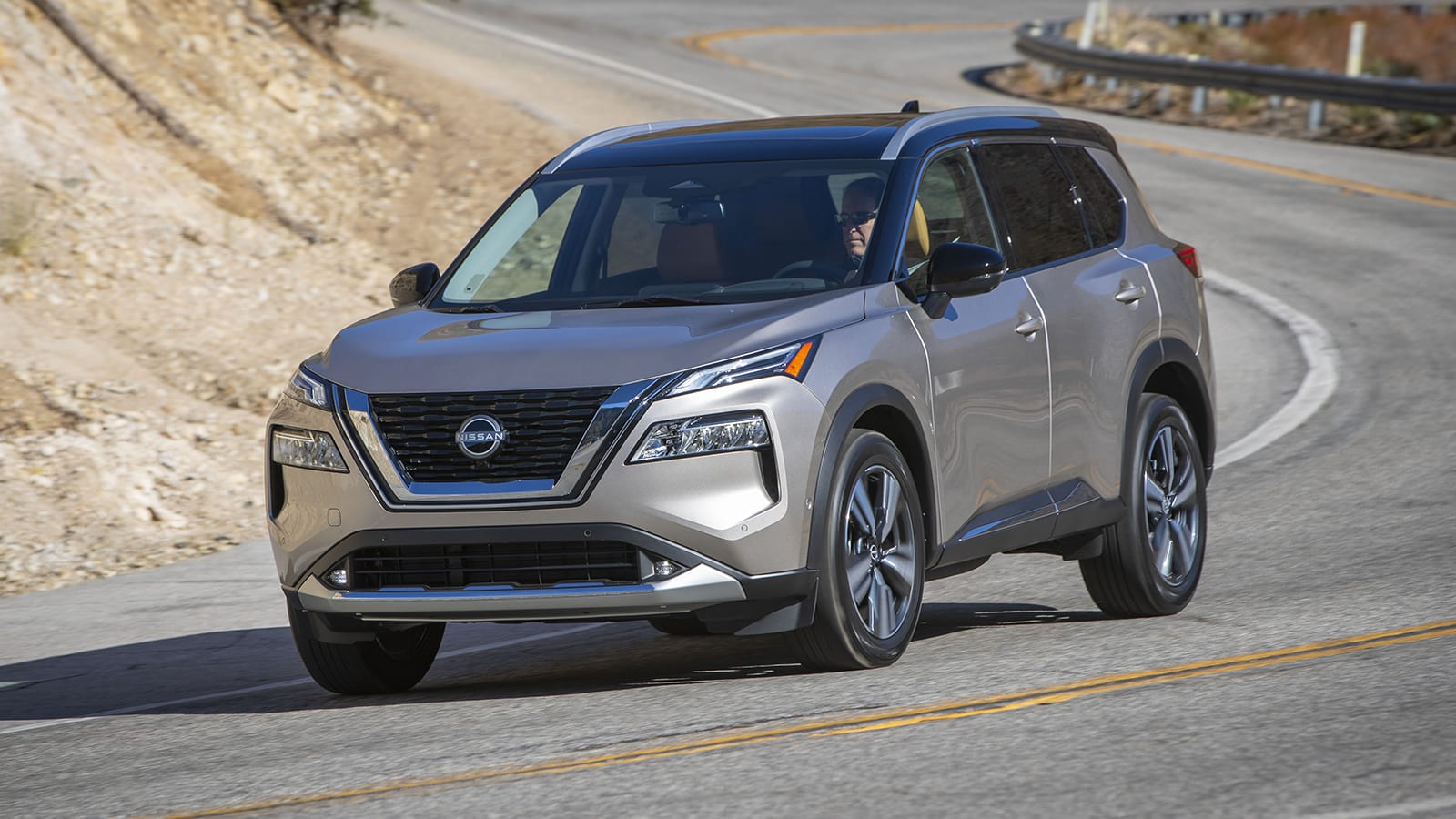 Dig deeper into everything else related to the all-new Nissan Rogue (just ignore everything we say about the sad-sack engine). 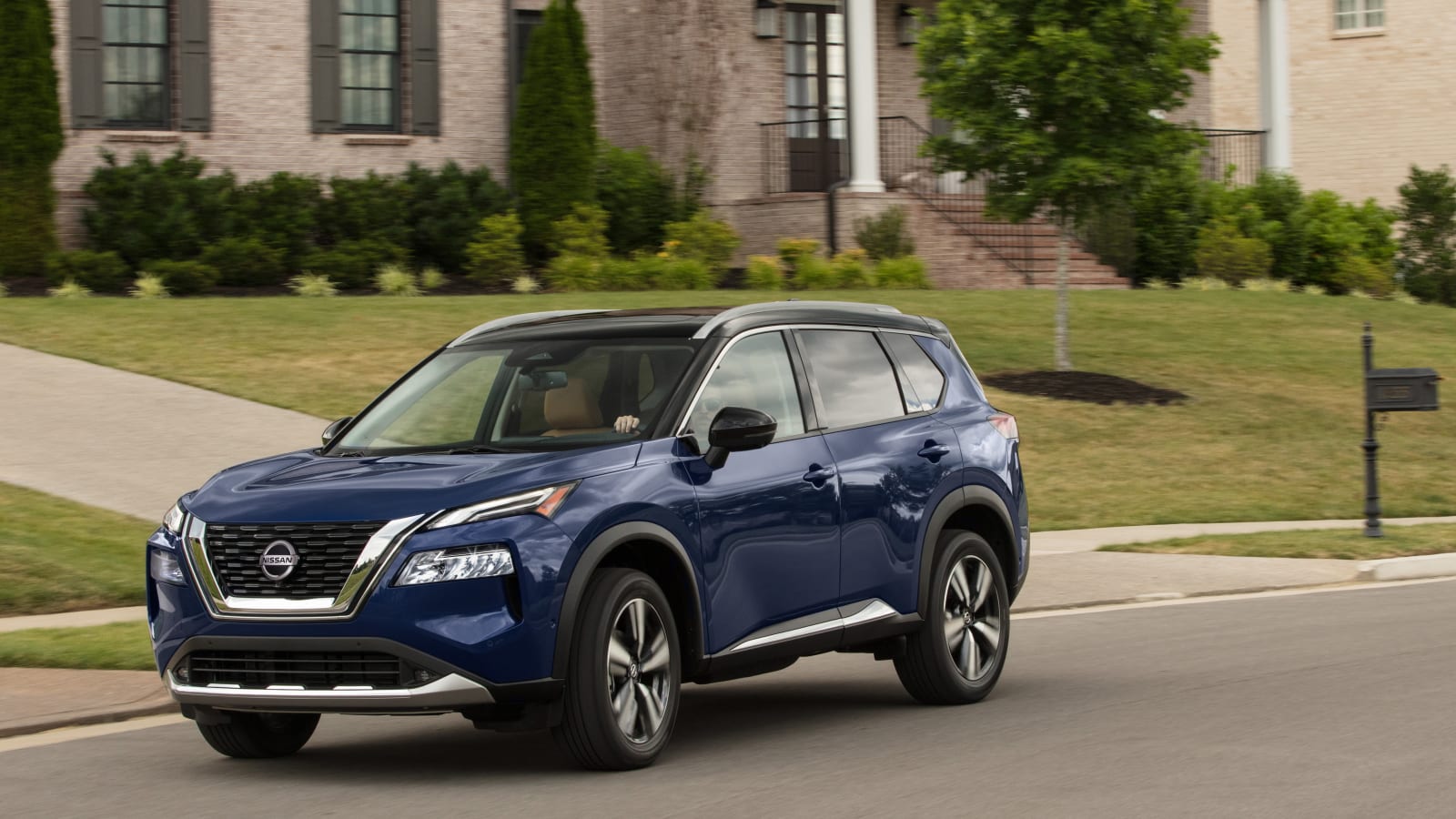 We show how much stuff can fit behind the Rogue SV’s raised back seat. Note that this is without the available Divide N Hide cargo system. 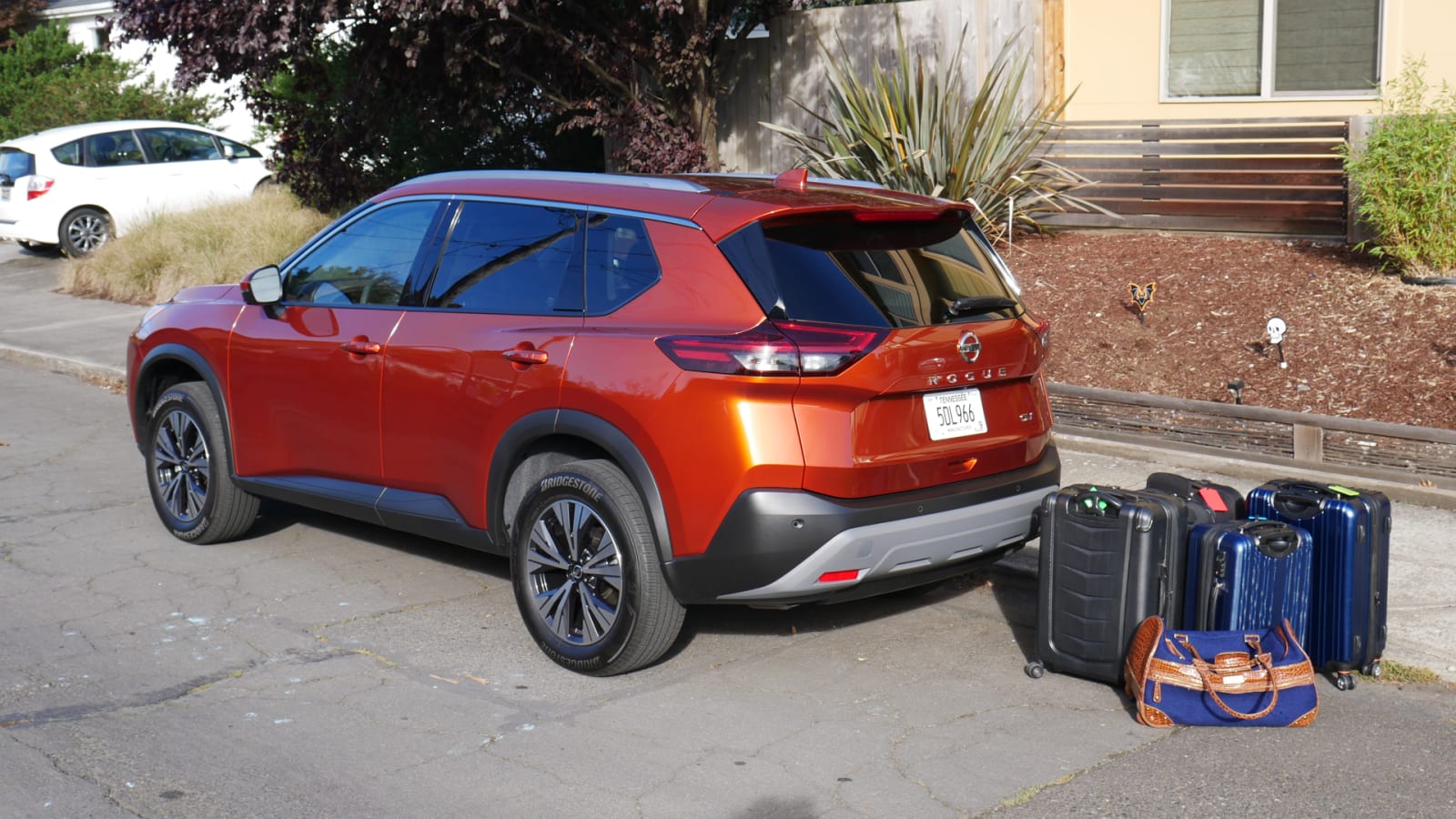 The Rogue has unusual faux roof rails that disguise plug-in points for a Nissan crossbar accessory. 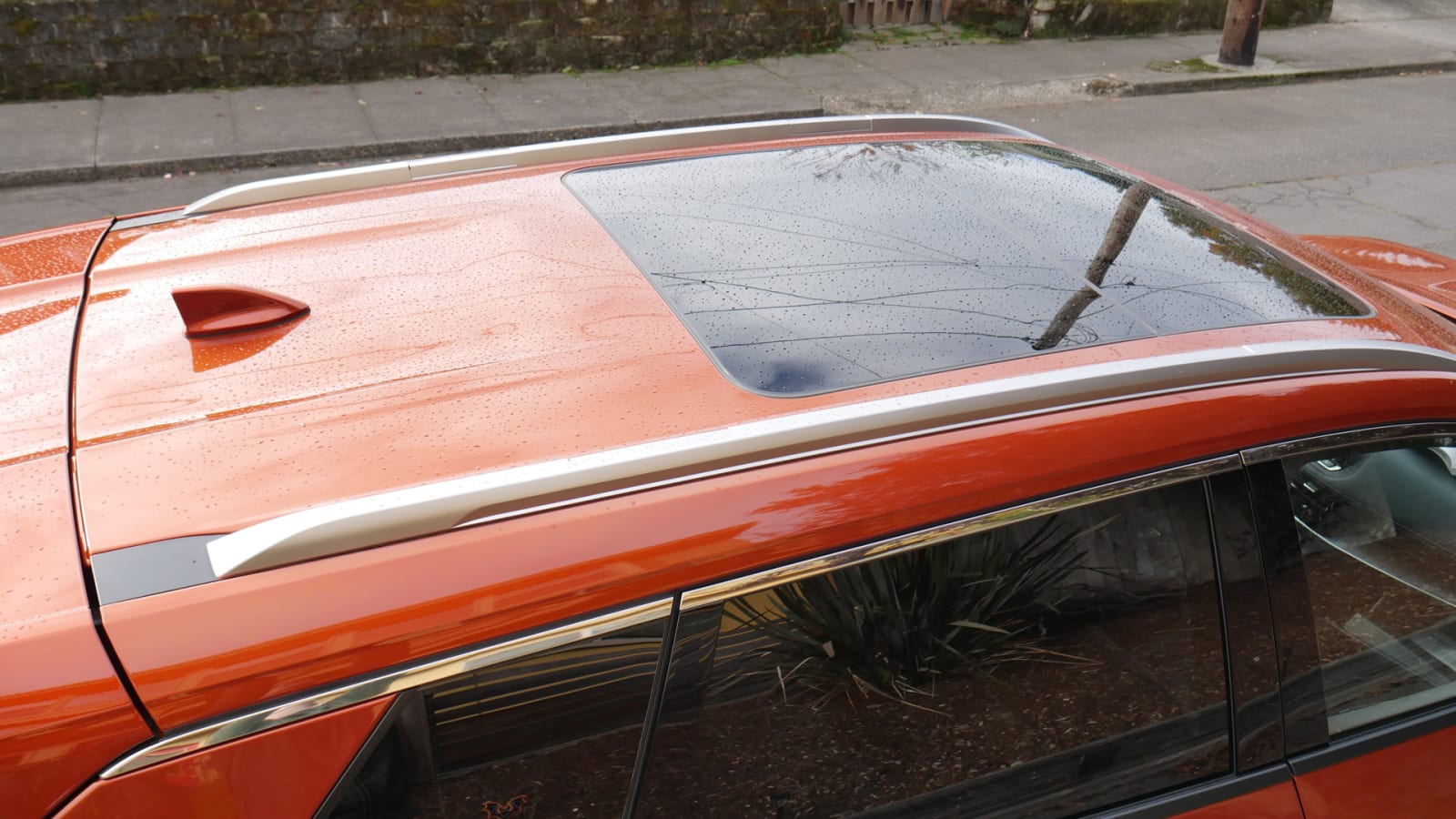 The other trims are SV, SL and Platinum. Each step up comes with some useful features, but the best value is the SV trim with the available $2,660 SV Premium Package. This gets you Nissan’s excellent ProPilot Assist tech, 18-inch wheels. power driver seat, 360-degree camera, in-car WiFi, leatherette seats, power liftgate and panoramic sunroof. The Platinum comes with a ton of luxurious features and appearance items, but it starts at $38,155. A few highlights include quilted leather seats, fully-digital instrument cluster, wireless phone charging, head-up display and the Bose premium audio system. 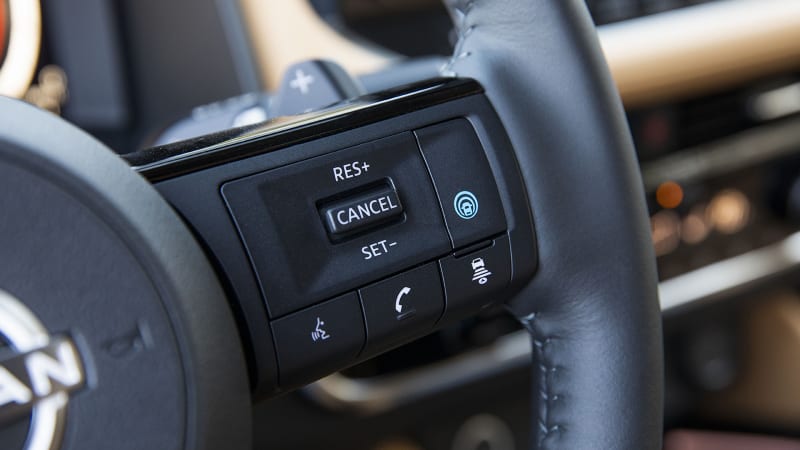 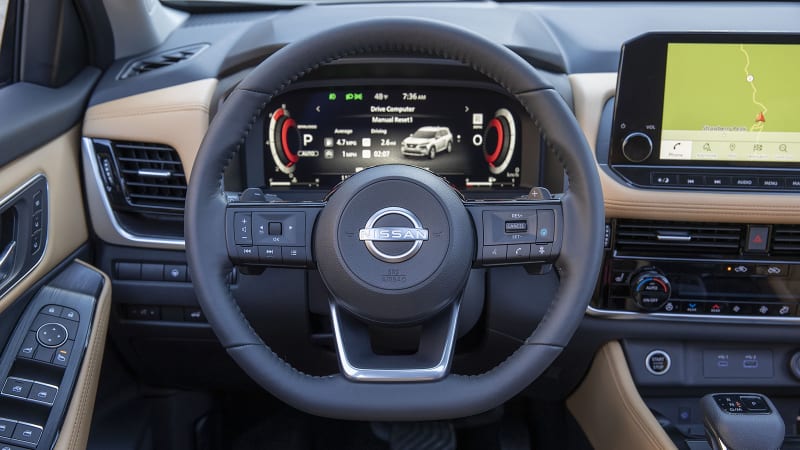 What are the Rogue safety ratings and driver assistance features?

The 2022 Rogue’s long list of standard safety equipment includes forward collision warning with automatic emergency braking and pedestrian detection, rear automatic braking (a rare feature), lane departure warning, blind-spot and rear cross traffic warning systems, driver inattention warning, a rear seat occupant reminder and auto high beams. Many of these systems are optional or not available at all on rival crossovers. If you step up above the base trim, you add ProPilot Assist, which is a comprehensive driving assistant for the highway. It includes adaptive cruise control, and a capable lane-centering system that’s more sophisticated than what is offered by rivals. Traffic sign recognition and ProPilot with Navi-Link (uses the navigation system to make ProPilot usable on highway junctions and exits) come as standard on the highest trim.

The Rogue received four out of five stars for overall crash protection from the National Highway Traffic Safety Administration. It got four stars for frontal protection and five stars for side protection. The Insurance Institute for Highway Safety named it a Top Safety Pick+, the highest honor, for sufficiently high ratings in all pertinent categories.