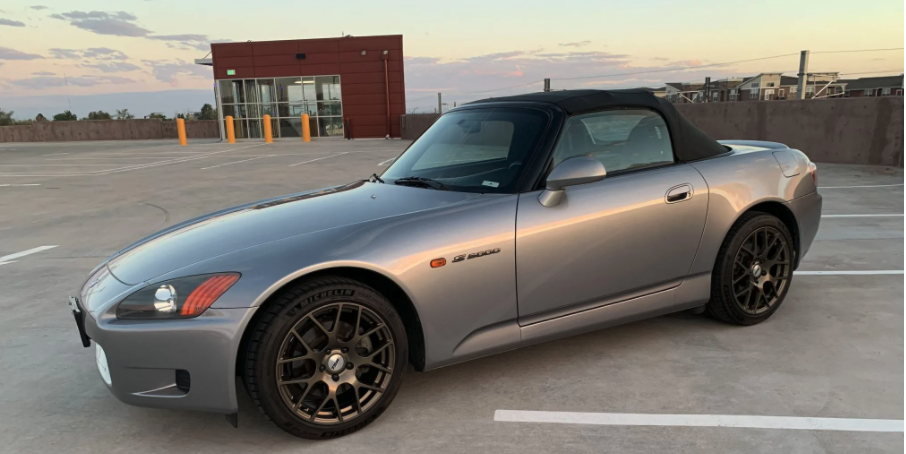 There was a time not long ago when vehicles featuring the Holy Quaternity of Hooliganism—naturally aspirated, front-engine, rear-wheel drive, and with a manual gearbox—were abundant. So much so in fact, that even now defunct GM subbrand Saturn had an entry in the segment. These days, that luxury isn’t afforded to enthusiasts searching for something fresh off the assembly line. Sure, a few fantastic examples exist, like the recent 10Best-winning Toyota GR86/Subaru BRZ siblings, but do any of these newfangled machines have an engine that will scream its way to an almost 9000-rpm redline? Much to our dismay, they do not. Fortunately for us, clean, unmolested examples of the AP1 Honda S2000 still exist – like this 2000 model, open for bidding until February 28 on the Bring a Trailer auction site—which, like Car and Driver, is part of Hearst Autos.

Car and Driver took the reins of a Y2K S2K back in ’99, and, to no one’s surprise, we gave it a glowing review. The obvious bit to praise was the engine, but that wasn’t the end of the story. The rigid construction, 50/50 weight distribution, and limited-slip differential made the S2000 a dreamy back-road companion. Its 0.90 g of lateral grip provided plenty of control when we wanted it, but the Honda’s tail could step out into a slide if poked and prodded just right.

As for the transmission, the tight ratios on the six-speed unit meant the driver could keep the rpm up and in the power band, and we also praised the great shift action. But the main event here is the F20C inline four-cylinder. The S2000’s powerplant has an adrenaline effect: if your heart isn’t racing after consecutive redline shifts, please seek medical attention. Jokes aside, the intoxicating nature of the F20C is very serious. It’s a rather loud thing, too; we experienced 93 dBA at full throttle during our testing. A modern comparison? A 2021 Porsche 718 Cayman GT4, in our testing, tied that 93-decibel rating.

This particular AP1 comes with a few extras: the original set of wheels with all-season tires (17-inch TSW wheels with Michelin Pilot Sport 4S tires are currently installed), a Koyorad aluminum radiator, rear brake rotors, manufacturer’s literature, and more. The interior appears mostly in fine condition other than a bit of wear on the outer bolster of the driver’s seat and a tear in the carpeting. Some recent maintenance has been completed, most notably spark plugs in early 2020, a brake master cylinder replacement, battery replacement in November 2020, and the serpentine belt just one year ago.

Anybody in the market for a riot of a driving experience should be looking at the S2000. With its wailing four-banger, fantastic shifter, and collapsible soft top, what’s not to like? Okay, sure, there are a few things not to like, but let’s not dwell too much on the lack of rear and cabin cargo space. What is important, however, is that the S2000 encapsulates all the hallmarks of a great sports car—and some lucky buyer is going to find out just how much fun it is. Bidding runs until late in the day on Monday, February 28.