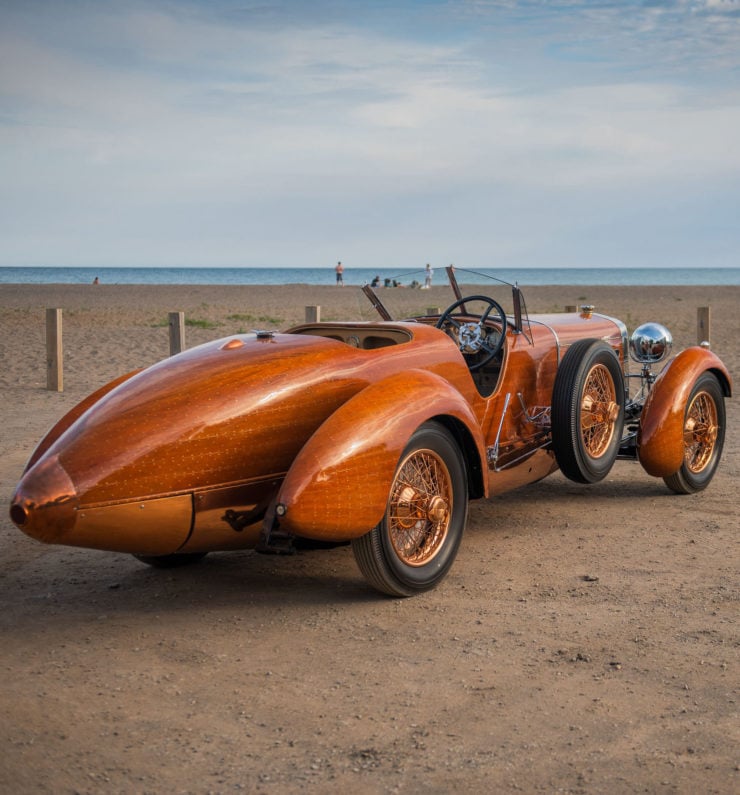 The Hispano-Suiza H6C “Tulipwood” Torpedo from 1924 is almost certainly the most famous vehicle ever made by the storied European automaker, largely due to its revolutionary and lightweight wooden body.

The powered rolling chassis was built by Hispano-Suiza at their French factory, it was then sent to French aircraft manufacturer Nieuport-Astra where engineer Henri Chasseriaux developed a rigid, lightweight body from 1/8th of an inch-thick strips of mahogany over 3/4 inch ribs.

The Hispano-Suiza H6 was introduced in 1919, just a year after the First World War. It was powered by an advanced new all-alloy inline-six cylinder engine that was closely based on Marc Birkigt’s V12 aero engine.

The elegant body is actually made from mahogany rather than tulipwood, it consists of 1/8th of an inch thick strips over 3/4 inch ribs and the body itself is said to weigh just 160 lbs.

Unusually for the era the H6 engine had a single overhead camshaft, rather than the more common flathead or overhead valve/pushrod design. The engine’s aluminum construction helped ensure it was far lighter than its iron counterparts, and its seven-bearing crankshaft was milled from steel billet to ensure strength.

Apart from the engine, one of the other major notable features of the Hispano-Suiza H6 was its advanced power-assisted braking system – a world first. The car was fitted with light-alloy drums on all four corners with a brake servo that provided additional braking power.

This technology was so revolutionary that the patent was licensed by a number of other manufacturers, most significantly by their arch rivals over at Rolls-Royce in England.

The original H6 and H6B were powered by a 6,597cc displacement version of the company’s straight-six, which was followed by an enlarged 7,983cc version in the H6C. All engine variants used a 3-speed manual transmission sending power back to a live axle rear end. 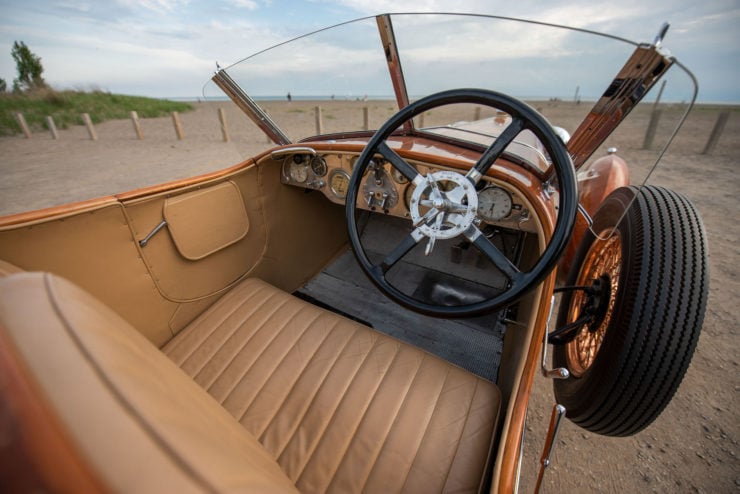 The Hispano-Suiza H6 series remains one of the most desirable automobiles of its age – from either side of the Atlantic.

The H6C you see here is an unusual vehicle both for its construction and for its period racing successes – with entries in both the Targa Florio and Coppa Florio in 1924 with 6th and 5th placed finishes respectively.

The car started life as a powered rolling H6C chassis built by Hispano-Suiza at their French factory and delivered to Dubonnet aperitif heir André Dubonnet – a talented racing driver, WWI fighter pilot, and an Olympic bobsledder.

This car is one of the lower surbaissé Type Sport variants with a lowered radiator and a 52 imperial gallon (236 liter) fuel tank designed for long rallies.

Perhaps due to his own experience as a pilot, Dubonnet commissioned aircraft manufacturer Nieuport-Astra of Argenteuil to body his car. Engineer Henri Chasseriaux developed an ultra-lightweight body consisting of 1/8th inch thick strips of mahogany laid over inner 3/4-inch ribs, all secured in place by thousands of aluminum rivets. 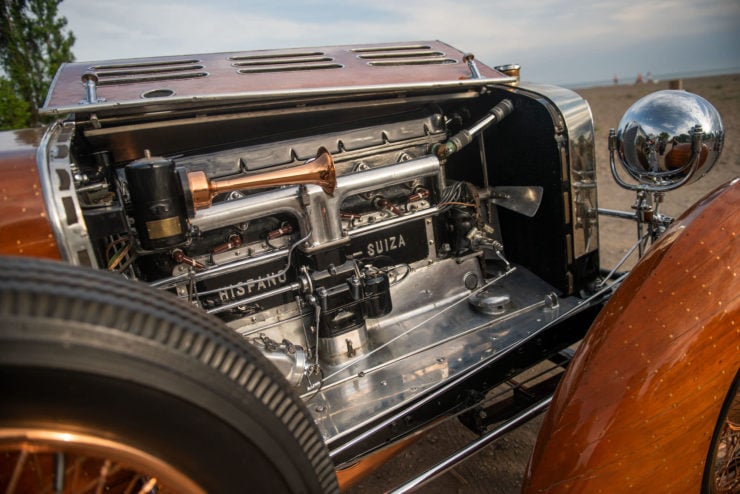 This is the 7,983cc version of the SOHC, all-alloy Hispano-Suiza H6 engine. It’s an advanced design said to essentially be half of one of the company’s V12 aero engines.

It’s not exactly where the “Tulipwood” name originated given that the car is bodied in mahogany, however the name has followed the car its entire life.

Once completed the body was weighed, tipping the scales at just 160 pounds (72.5 kgs) – extremely light compared to similarly sized steel bodies. Once the car was completed Dubonnet drove it in both the Targa Florio and Coppa Florio as mentioned above, finishing well inside the most elite group of drivers.

The car has a long and fascinating history, it was later owned by a perfume heir followed by a marmalade heir. It suffered some minor bodywork damage during WWII when bomb shrapnel struck the rear of the car, however this was all professionally repaired many years ago. 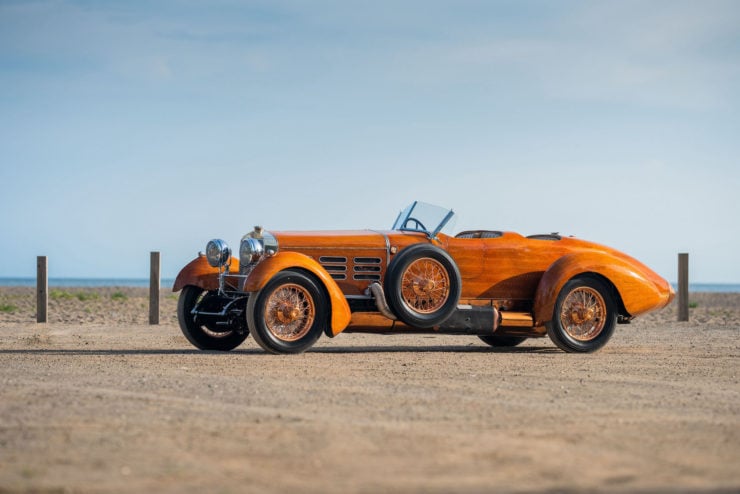 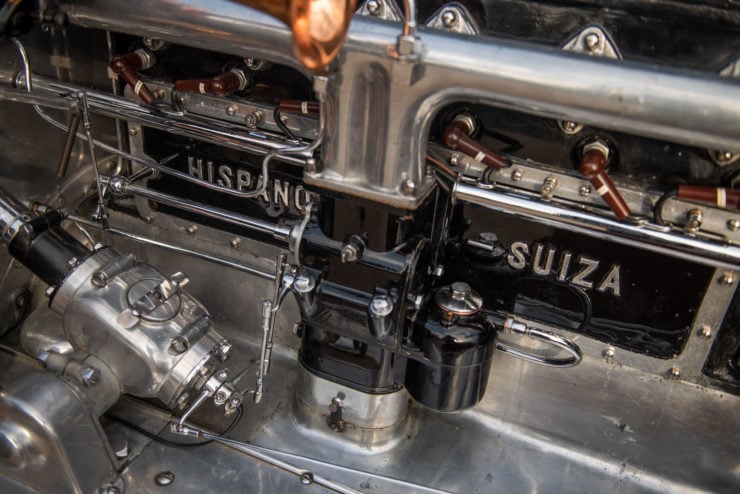 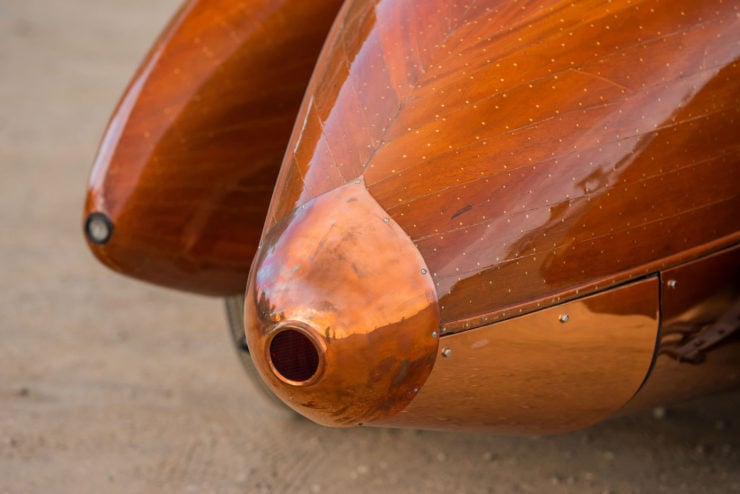 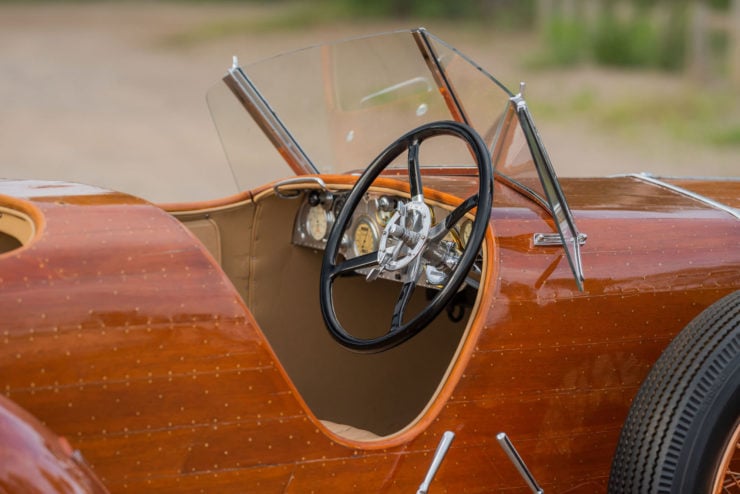 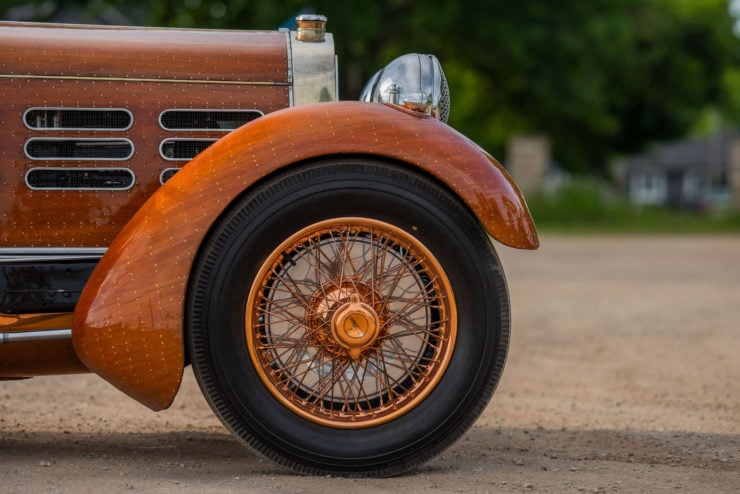 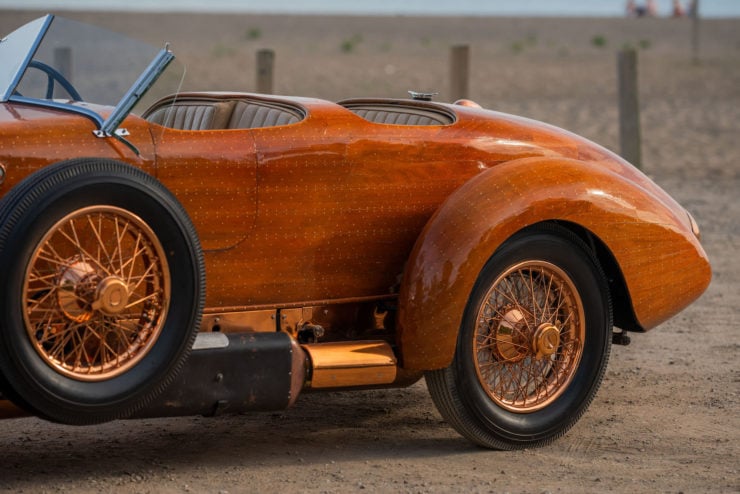 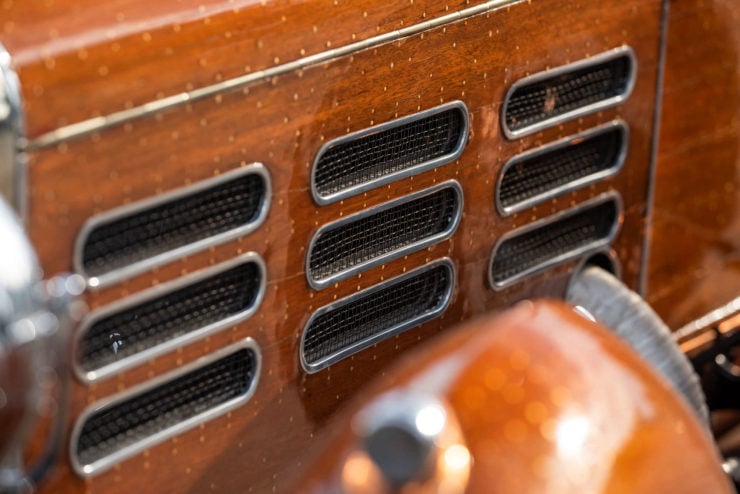 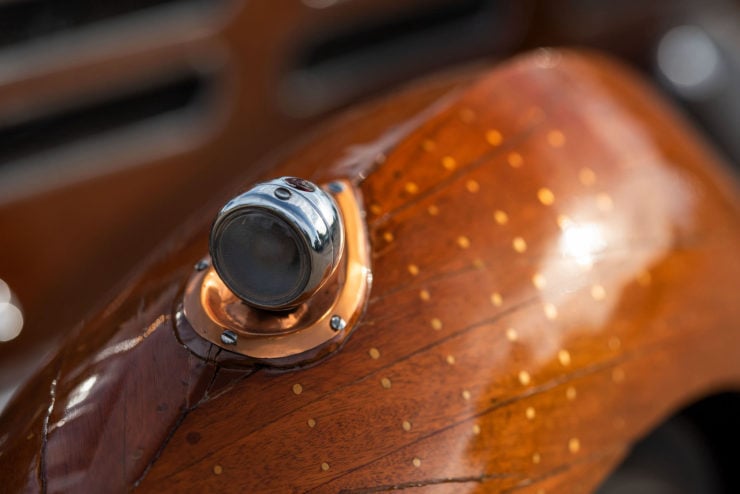 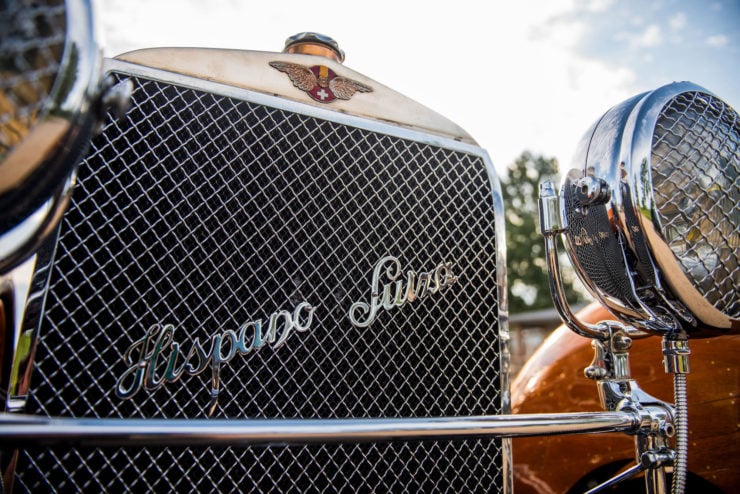 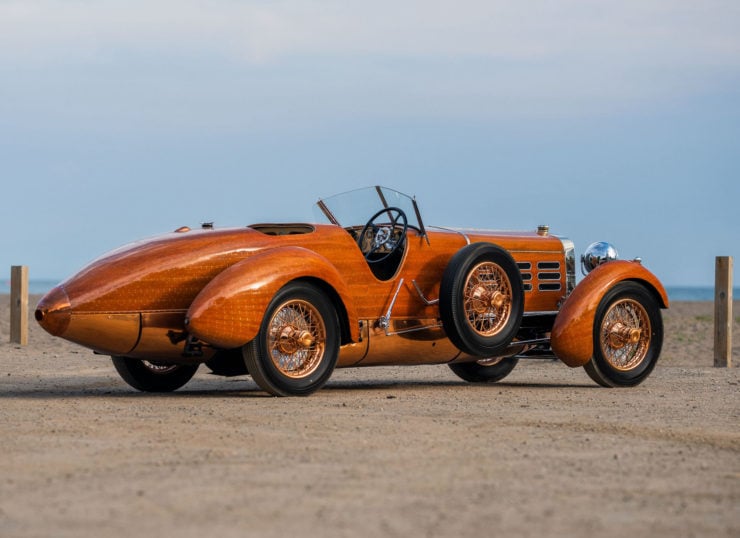 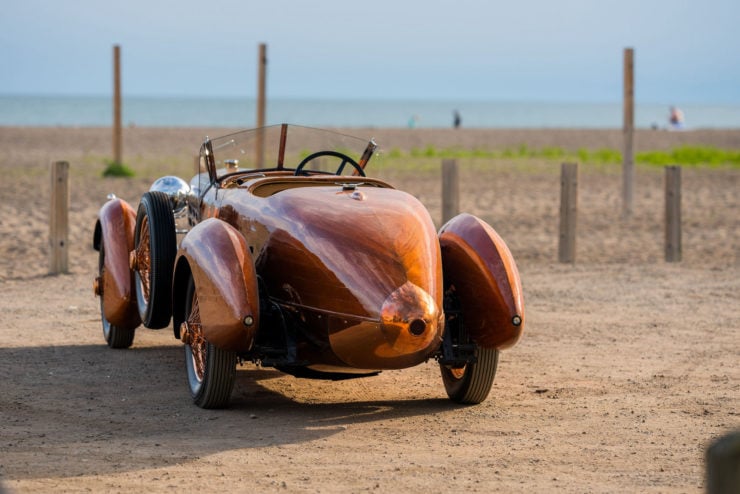 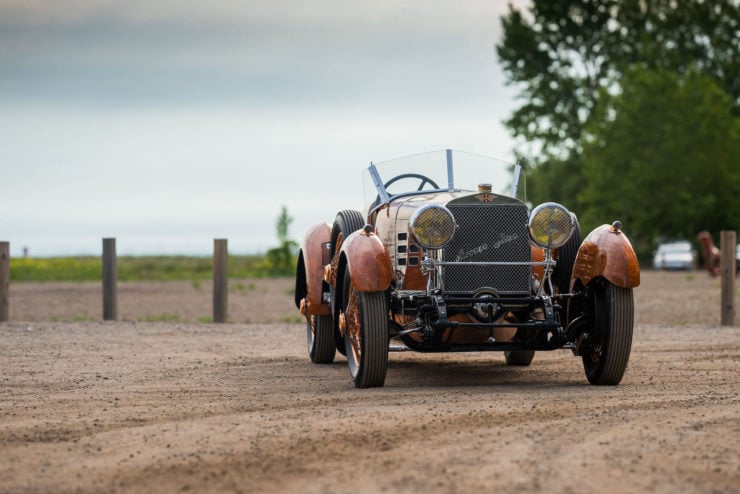 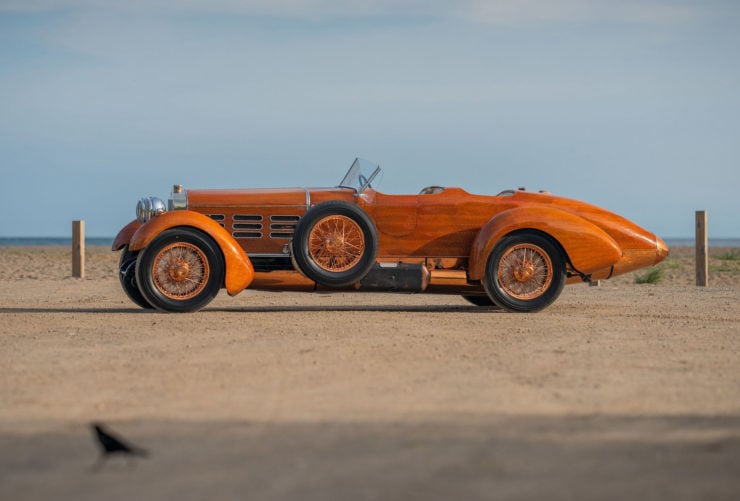 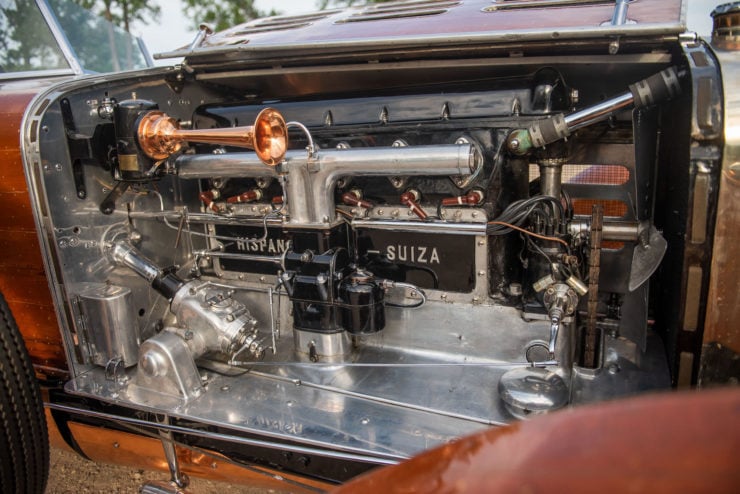