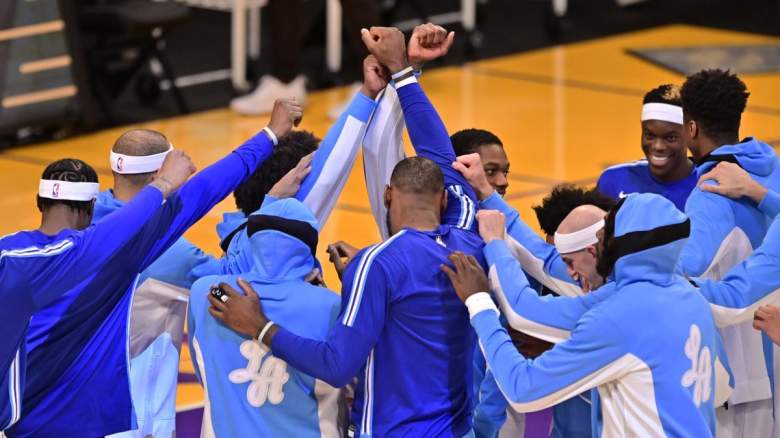 A member of the 2020-21 Los Angeles Lakers is currently an unrestricted free agent and could help the current squad with his skillset. However, the big man will never play for the franchise again.

Heavy’s Sean Deveney spoke to an Eastern Conference exec who said that Montrezl Harrell and the Lakers won’t reunite this summer for several reasons.

“Oh, he has pretty much burned his bridge in Los Angeles,” the exec told Deveney about Harrell. “I think a lot of his annoyance with that whole situation was aimed at Frank (Vogel), but he did not make any friends in the organization with the stuff he said after he left. Before he left, even.”

Harrell appeared in 69 games for the Lakers during the 2020-21 season and averaged 13.5 points and 6.2 rebounds while shooting 62.2% from the field. Los Angeles won 42 games and lost to the Phoenix Suns in the first round of the 2021 playoffs in six games.

Harrell only played one season for the Lakers. He was traded to the Washington Wizards in the summer of 2021 in the blockbuster Russell Westbrook trade. The Louisville product suited up for two teams last season. He played 46 games with the Wizards before getting traded to the Charlotte Hornets. Harrell finished the 2021-22 campaign with averages of 13.1 points and 6.1 rebounds in 71 games with Washington and Charlotte.

Harrell Was Arrested in May

Harrell was pulled over on I-75 in Richmond, Kentucky, on the morning of May 12 after a state trooper said he was following another car too closely. The trooper said he smelled marijuana and arrested Harrell after finding three pounds of marijuana in vacuum-sealed bags inside the car. Roderick Boone of the Charlotte Observer was the first to report the arrest.

The 28-year-old Harrell has been charged with trafficking less than five pounds of marijuana. If convicted on that count, Harrell could face a minimum of one year and a maximum of five years in prison, according to state law, plus a maximum $10,000 fine.

The police report said Harrell was driving a silver 2020 Honda Pilot. Harrell admitted to having marijuana and “produced a small amount from his sweatpants,” the police report revealed. Police found the three pounds of marijuana in a backpack in the backseat.

Harrell made $9.7 million in 2021-22. He holds career averages of 12.9 points and 5.3 rebounds in 458 regular-season games with the Houston Rockets, Los Angeles Clippers, Lakers, Wizards and Hornets.

The Eastern Conference exec who talked to Deveney believes that Harrell will be a free agent until his case gets settled.

“The feeling is now that he’s toxic until his case gets settled,” the exec told Deveney. “He’s made the case that he did not really do anything wrong, that he had a minor infraction and that might very well be true. The weed thing, no one really cares about that. The league does not come down on that as long as it is just a possession thing. His case got pushed back, though, so we’ll have to wait and see.

“And you know what he can do on the floor. He can give you that punch in the middle off the bench. With everything that has gone on, someone is going to wind up with him for the minimum when things get settled and that is a good deal, really. But no one is going to go in for him while all of that is hanging out there.”

Harrell’s best season in the NBA came in 2019-20. He averaged 18.6 points and 7.1 rebounds for the Clippers and won the Sixth Man of the Year Award.