Heritage Edition Bronco: A Horse of a Different Color 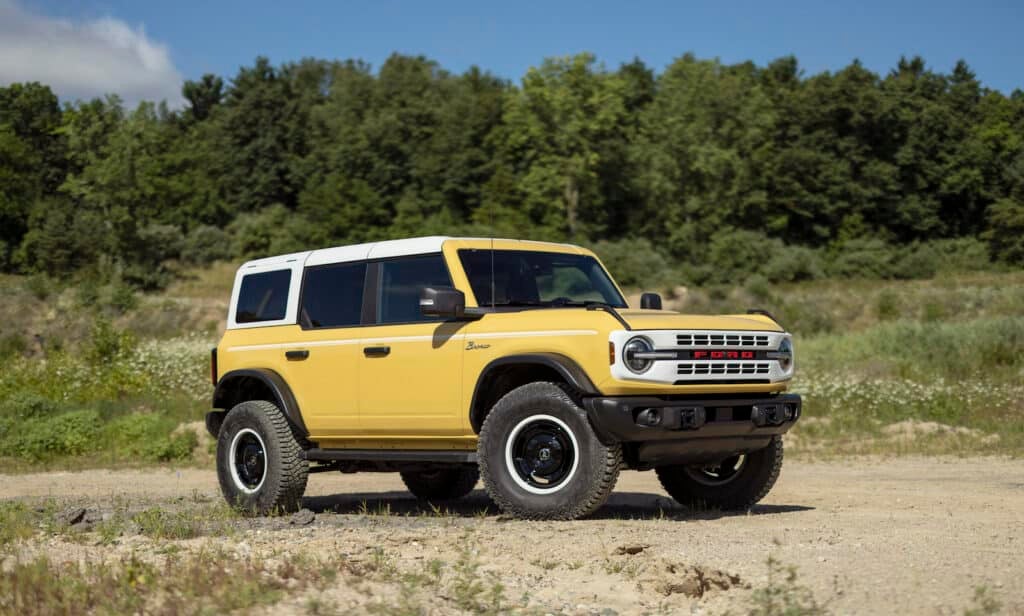 If you’re in the market for a Bronco or Bronco Sport, you might want to consider ordering one of the new 2023 Bronco and Bronco Sport Heritage or Heritage Limited editions.

Ford will produce 1,966 examples of each for the Bronco two-door, Bronco four-door, and Bronco Sport SUVs to honor the year the original Bronco made its debut.

“Bronco captivated America in the mid-’60s with its rugged style and uncompromising off-road agility, a legacy that is still prevalent today,” said Mark Grueber, Bronco marketing manager. “With these new Heritage and Heritage Limited editions, we’re paying respect to Bronco’s roots with nods to some of the signature design cues from the first-generation vehicle, while continuing to build the Bronco brand.”

A wardrobe from yesteryear

Climb inside and you’ll find Bronco’s Heritage Edition includes unique front and rear floor mats, an exclusive Oxford White instrument panel, plaid fabric seats and Big Bend equipment level, which is one step up from base, so you’ll get a leather-wrapped shift knob and steering wheel, rear privacy glass, LED fog lights and a full-size spare.

Opting for the Heritage Limited Edition upgrades your retro ride to the Badlands series equipment and features, which adds an overhead console with map lights and auxiliary switches with pre-run accessory wires, MOLLE Strap System on the front seat backs, and rubberized flooring with drain plugs.

A larger 2.7-liter EcoBoost V-6 engine delivers 330 hp and 415 lb-ft torque to a 10-speed automatic transmission. And since it’s a Badlands trim, you’ll also get the ability to disconnect the front stabilizer bar, and make use of two additional G.O.A.T. Modes: Rock-Crawl and Baja.

The Heritage Limited Edition is differentiated on the outside by its metal “Bronco” script fender badging, and on the inside by its leather-trimmed/vinyl plaid seats with white and Race Red accent stitching, and unique console badging.

Heritage models for Broncos without a heritage

While Ford didn’t build a Bronco Sport until last year, that hasn’t prevented them from offering the Heritage and Heritage Limited Edition on the Bronco Sport.

“It is just as important that we give our customers special editions similar to what we have done with the two- and four-door Bronco,” Grueber said. “We think the iconic themes from the ‘60s work perfectly on this vehicle.”

Both Bronco Sport Heritage models wear an exterior wardrobe similar, but not identical, to that of its larger siblings, with an Oxford roof, Oxford White heritage grille with Race Red “BRONCO” lettering, and Oxford White 17-inch aluminum heritage wheels and bodyside stripes.

The 2023 Bronco Sport Heritage Edition is based on the Big Bend series, just like the full-size Bronco SUVs, and comes standard with a 1.5-liter EcoBoost engine and 8-speed automatic transmission that generates 181 hp and 190 lb-ft of torque. A Terrain Management System with Normal, Eco, Sport, Slippery, Mud/Ruts and Sand G.O.A.T. Modes is standard.

Choose the Bronco Sport Heritage Limited Edition and you get a power upgrade from a 2.0-liter EcoBoost 4-cylinder engine with 250 hp and 277 lb-ft of torque. It also comes equipped with additional Mud/Ruts and Rock Crawl G.O.A.T. Modes, and a twin-clutch rear-drive 4×4 system with a differential lock that can divert virtually all rear axle torque to either wheel.

When it comes to color, you’ll find the Bronco Heritage Limited Edition is initially only available in Robin’s Egg Blue, a throwback to the 1966 Bronco’s Arcadian Blue. The Bronco Heritage Edition is offered in five hues. Yellowstone Metallic, based on the 1971 Ford color Prairie Yellow, is anticipated for the late 2023 model year, and Peak Blue is slated to debut in 2024.