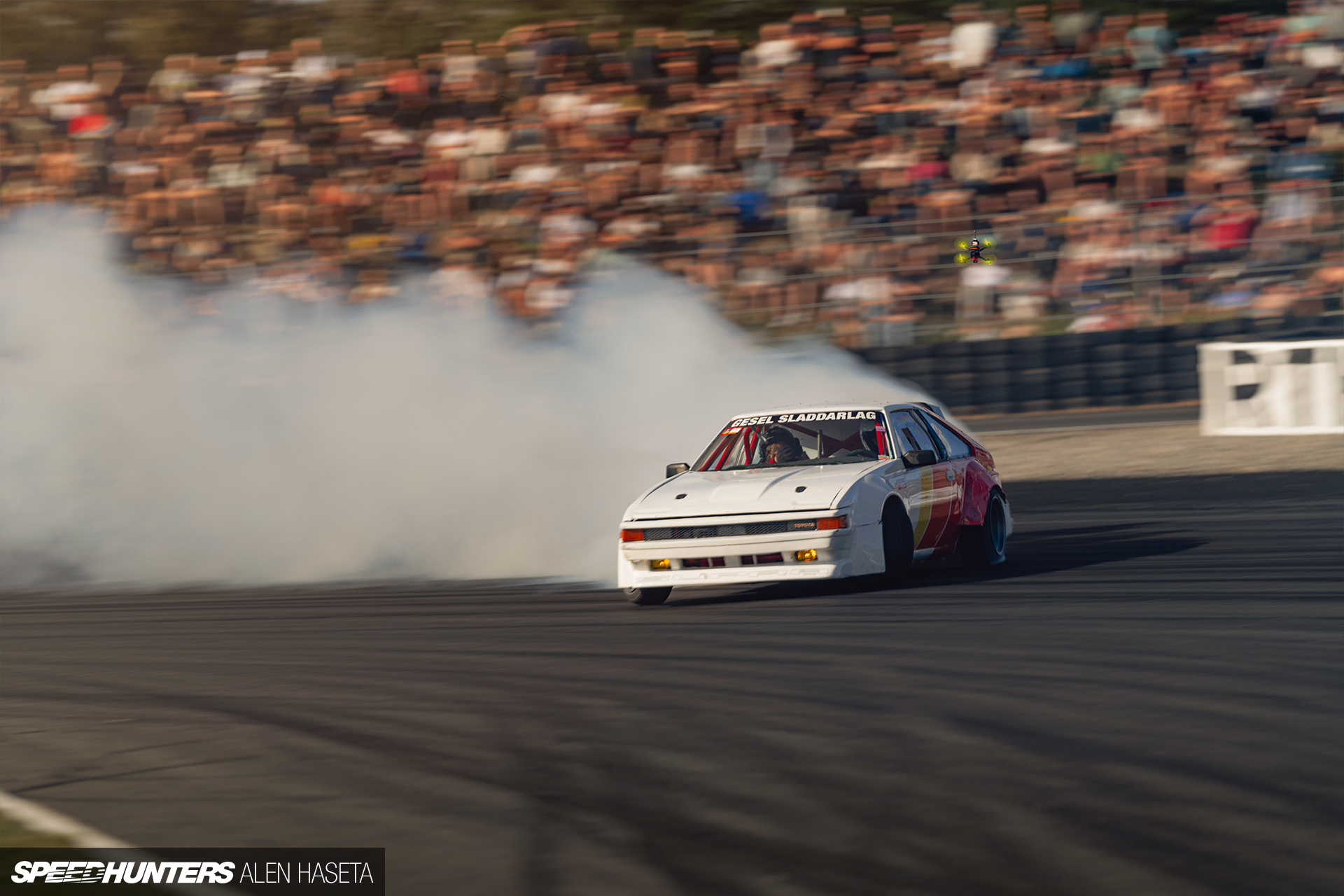 Cars were designed to do one thing: get us from one point to another, although some in quicker and more exciting ways than others. However, as time goes on and proper analog performance cars get older, that purpose is slowly evolving into preserving them rather than driving them.

With the rise in values of Japanese performance car icons in particular, I can see why. However, some people out there still like to throw these cars around like it’s 2005. People like Tore Leithe.

Born and raised in Norway, the 25-year-old ATV/snowmobile mechanic is no stranger to old Toyotas. In fact, Tore has owned a total of eight AE86s over the years with few of them still in his possession.

Tore’s obsession with ’80s Toyotas and drifting began when he came across a video of the ‘Drift King’ himself, Keiichi Tsuchiya, getting busy behind the wheel of his iconic Tec-Art’s-built Trueno. From that point on, both Toyotas and drifting have been a big part of Tore’s life.

Tore’s latest build is a 1985 Toyota Celica XX, a model commonly known as a Supra Celica. It was a spontaneous purchase from a friend, purely made because Tore wanted to experience something other than an AE86.

In all honesty, this car was a breath of fresh air at Gatebil Rudskogen this year. In between all of the BMWs, Nissans and other high-powered, high-spec drift cars in attendance, Tore’s Toyota really stood out. I wanted to know more.

Let’s start by looking at the exterior. The first thing you notice is the iconic red, orange and yellow vintage Toyota TRD livery, as popularized by Ivan ‘Ironman’ Stewart and his Baja 300 truck.

This car is designed to be at its limits when drifting, so the occasional wall tap was taken into consideration with the exterior. Tire rubs are welcomed, and the Celica wears all its damage as a badge of honor.

The wide front bumper, hood and pumped front and rear fenders are all custom fiberglass items that Tore made himself. In nod to the car’s past, the front and back ends sport the old ‘Supra’ logo, first used when the Supra Celica was announced back in the 1980s.

Ashes Asta 8-spoke style wheels in a 15×9-inch fitment are fitted front and rear. Since Tore is a huge fan of Japanese drifting from the late ’90s and early ’00s, he only even considered fitting 15-inch wheels. He could have gone for 17s, but his GKtech steering angle kit would’ve had to be replaced by a Wisefab kit, and in Tore’s world drift cars are supposed to be cheap, so that wasn’t an option. Behind the wheels, and keeping with the budget-friendly build ethos, sit Nissan S13 brakes.

Suspension-wise, the Toyota is underpinned by S13 subframes front and rear, JIC Magic coilovers, and Cusco adjustable toe control rods out back.

Inside, it’s all business. To keep Tore safe, a full roll cage in bright red brings some nice contrast to the otherwise largely white interior. The dash came from a Mk1 Celica, complete with its original wooden panels which now house Omori gauges (not to be confused with Nissan Omori) and one AEM Lambda meter. The Bride fixed-back bucket seats are early-2000s models paired with QSP harnesses.

It was too hard to photograph, but on the back of one the seats an original Option magazine sticker from 1997 is still intact. It’s a nice easter egg for anyone that spots it.

And no, your eyes are not deceiving you – that is indeed a handbrake lever fashioned from axe handle for some proper Norwegian Viking vibes.

It was never Tore’s intention to have a flashy interior or exterior with this car; it was more a case of what he had laying around and what he could modify to fit or build himself. That thinking extends to the engine too.

Under the hood of this Celica sits Tore’s budget-friendly alternative to a 2JZ – a 2.5L 1JZ-GTE VVTi that, tuned through its MaxxECU engine management system, sends 500hp to the Celica’s rear wheels. The engine itself is internally stock; the external modifications are simple and include a Precision 6266 turbocharger and Hurricane 60mm wastegate, front-mount intercooler, Injector Dynamics ID1000 injectors and VAG coil packs.

The radiator, complete with a Volvo V70 electric fan, has been relocated to the rear with air entering the chamber beneath the hatch wing. Supplying the 1,000cc injectors are twin Aeromotive pumps that draw E85 from the aluminum tank.

Getting the power to the ground efficiently and reliably is a Toyota R154 gearbox and ACT clutch, along with an R33 Skyline differential and axles.

Despite having 500whp at his disposal in the Celica, Tore still thinks he prefers his 185hp Toyota AE86 that he uses to compete in the Norwegian NorgesCup drift series. “I can throw it [my AE86] around and abuse it to 110% of its limit, and it never breaks. It’s so much fun.”

Tore also told me that he has so much car stuff going on behind the scenes – a total restoration of an AE86 Trueno, a Toyota Supra Mk2 build for the road, modding his daily Toyota Crown, plus a whole lot of other small projects. Perhaps I should pay him a visit over winter and do a garage tour?