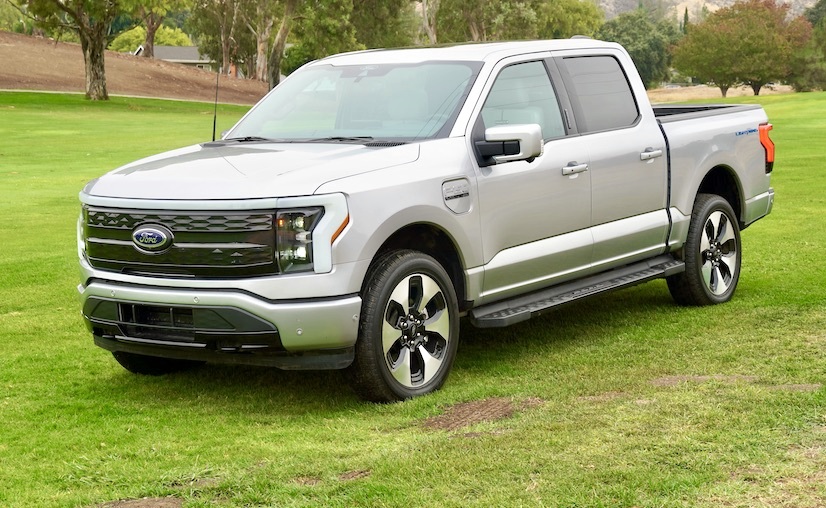 The EV Pickup Truck from Ford

For 44 years and counting, the number one selling truck in the US has been the Ford F-150. When Ford decided to enter the truck EV market, it made perfect sense to extend the success of its Swiss army knife of pickups with an electric version.

The Ford F-150 Lightning isn’t a replacement for any of the existing F-150s, it is a new family member with a smoother, more aerodynamic body and a new front fascia, lighting and wheels. It’s only available as a SuperCrew 4-door cab and a 5.5 -foot bed. For an F-150 owner, the Lightning has all the regular options, but it offers new features that only an EV can deliver.

Ford’s biggest market for the F-150 is its commercial customers, and Ford hopes that will continue with the Lightning. Ford’s fleet business is a proven success with commercial truckers. Ford has invested in extending that segment to include commercial EV sales, service, and financing to make its commercial customers’ transition to EV trucks easy and seamless. Retail customers are also important to Ford and to that end, have configured the Lightning with the same wide array of options the F-150 owners are familiar with today.

How does the Lightning Differ from ICE F-150s?

Or would it be better to say how much of the Lightning is the same as the F-150 driving experience?

The Lightning looks the same as an ICE F-150, but fans will notice the Lightning’s unique nose, wheels and tail. There are the same four trims (but not the King Ranch version) as the ICE F-50s, the Pro, XLT, Lariat, and the range-topping Platinum, plus most of the accessories and options from the ICE F-150s are also available.

Regardless of the trim, the Lightning offers some unique features. The engine compartment is no longer needed, so that space is now what Ford calls the “Power Mega Frunk,” with 14.1 cubic feet of storage that can carry up to 400 pounds. It includes four 120-volt AC outlets and two USB ports, with two more 120-volt outlets in the cab and four more in the standard dimension F-150 bed, plus an additional 240-volt outlet. These outlets can provide up to 9.6 kliowatts with the optional Pro-Power-Onboard. Ford also offers home-charging solutions that can power an entire home for several days using the onboard battery. While this setup can be pricy, it shows the versatility and potential of the Lightning.

The drivetrain for all F-150 Lightnings has two inboard three-phase fixed magnet AC motors driving the front and rear wheels. Horsepower is 452 for the standard range version and 580 for the extended range truck, and the torque for both versions is 775 pound-feet.

Two battery options are available, and both are lithium-ion pouch-type packs with internal battery management and liquid cooling.

The standard-range version has a 98-kilowatt-hour (kWh) battery with an 11.3/10.5 kW internal charger. The extended-range version ups the battery capacity to 131 kWh with a 19.2/17.6 kW internal charger. The EPA-rated range is 230 miles for the standard range and 320 miles for the extended range battery. These are competitive with other smaller EVs, but the EcoBoost V6 F-150 version tops 520 miles of EPA range with a 26-gallon gas tank.

How does It Ride?

The Lightning is the first F-150 to offer four-wheel independent suspension with a double-wishbone with coil-over shock setup in the front and independent semi-trailing arms with coil-over heavy-duty shocks in the rear. For a three-and-a-half-ton truck, it drives very smoothly, with a bit of wandering and jiggling from the body on frame architecture. The interior is serene with a 70-mph sound measurement of 65 dB, which is in Rolls Royce territory. Wind noise is absent, and the cab is rock solid, making for a bank vault silence and smoothness.

That silence is deceiving when the Lightning is under hard acceleration unless the fake engine sound is active. The feel is like sitting in the front cabin of a Boeing 777. You get pushed into the seat as the truck effortlessly reaches 60 in less than 4.6-seconds. The only noise you hear is the front tires chirping as the traction control modulates the power. From 0-100, the front tires tried to break loose several times. Luckily top speed is limited to 120 mph.

Of course, the Lightning has all the usual safety equipment and electronics, including a sizeable 15.5-inch center touch screen and a 12-inch driver’s digital screen.

Ford’s adaptive cruise control, including Co-Pilot360 with BlueCruise hands-free driving, is standard on the Lighting.

This truck tries to blend in, but despite its efforts, it gets lots of attention.

Our initial impressions of the Lightning were that it was too much like the regular F-150s, and no one would notice it. Well, were we wrong. Everywhere we went, the Lightning turned heads. Leave it parked for a bit, and someone was always peeking into it. We had several of our neighbors text and ask if they could come over and sit in it, including one fellow that ordered a Lightning last year, but had yet to sit in one.

There are six trim versions of the F-150 Lightning. Base MSRP (as of November 1, 2022) after two bumps up during recent months. Prices do not include the destination charge, which is noted at the bottom of the list.

As with other Ford EVs like the Mustang Mach-E and the E-Transit, demand has been overwhelming, making it almost impossible to buy one. Nearly a year after pre-ordering started, the Lightning is only now beginning to make its way into customers’ hands. Ford has been working overtime to ramp production, with a goal of 150,000 Lightnings a year, but even that won’t fill all pre-orders, much less demand.

The most significant supply chain issue is having a sufficient number of batteries to make more trucks. Ford is ramping up new battery plants, enlarging the Lightning factory, and doing all the things involved to bring a new product to market, but it will take time. Then there are the franchise dealers motivated by just one thing: how much can I get for a hot product in short supply. It’s not unusual for a dealer to mark up a Lightning Platinum an additional $50,000 today just to place an order. Ford is in the process of getting its dealers in line with new requirements (including limiting price markup) for dealers to be able to sell Ford’s EV products.

To add to this frustration, the pre-ordering for the 2023 Lightning won’t reopen until the summer of 2023. The best advice right now is to get on Ford’s update system and make your interest known. You can also visit Ford reservations to get more information on ordering.

The Ford F-150 Lightning is the Best EV Truck Today.

Just as the regular F-150 is the best-selling truck in America, the Ford F-150 Lightning will also be the best-selling EV truck in the USA, and its pre-orders back that up. So, if you want a state-of-the-art pickup that runs on electrons, set your alarm for next summer so you will be ready!

Clean Fleet Report is loaned free test vehicles from automakers to evaluate, typically for a week at a time. Our road tests are based on this one-week drive of a new vehicle. Because of this we don’t address issues such as long-term reliability or total cost of ownership. In addition, we are often invited to manufacturer events highlighting new vehicles or technology. As part of these events we may be offered free transportation, lodging or meals. We do our best to present our unvarnished evaluations of vehicles and news irrespective of these inducements.

Our focus is on vehicles that offer the best fuel economy in their class, which leads us to emphasize electric cars, plug-in hybrids, hybrids and diesels. We also feature those efficient gas-powered vehicles that are among the top mpg vehicles in their class. In addition, we aim to offer reviews and news on advanced technology and the alternative fuel vehicle market. We welcome any feedback from vehicle owners and are dedicated to providing a forum for alternative viewpoints. Please let us know your views at [email protected]