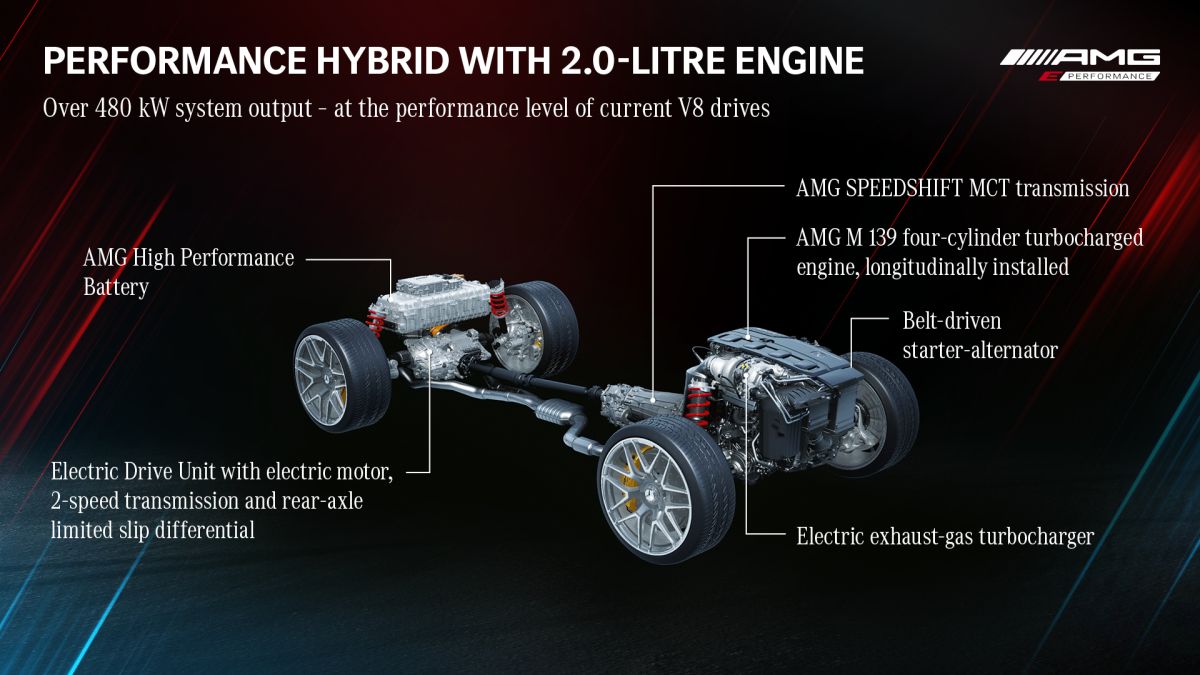 Mercedes is ditching the V8 engine in favour of a highly sophisticated PHEV system called P3 Hybrid for the new Mercedes-AMG C 63 S E Performance. We try to explain how it function.

The P3 Hybrid system of the Mercedes-AMG C 63 S E Performance consists of the 2-litre M139l turbo engine and an electric motor that distributes power to all four wheels via a 4Matic+ all-wheel drive system. The electric motor is located at the rear axle and is integrated into a compact electric drive unit (CDU) with an electrically operated two-speed gearbox and limited slip differential.

The 2-litre thermal engine is derived from the 421 HP engine in the AMG A 45 and is coded M139l where l signifies that it is longitudinally mounted whereas in the A 45 it is transversely mounted. This means that power is transmitted to the rear axle via a cardan shaft. Then, in case of rear axle slip, the same propeller shaft used to transmit part of the electric motor power to the front wheels also transmits part of the heat engine power to the front wheels.

The thermal engine develops 476 HP/6725 rpm and 545 Nm/5,250-5,500 rpm. With a power output of 238 HP/litre, the M139l is the world’s most powerful 4-cylinder engine. This was only made possible by the use of an electrically driven turbocharger which I have written about here before.

The technology is borrowed from Formula 1 and consists of an electric motor only 4 cm thin integrated directly on the turbine shaft between the turbine wheel on the exhaust side and the compressor wheel on the intake side. This means that the turbocharger response is no longer dependent on exhaust gas flow, but is controlled electrically and so the response is instantaneous at low revs.

The turbocharger motor is powered from the PHEV system’s 400V network and operates up to 150,000 rpm. The engine has an integrated starter generator (RSG) also powered from the 400V network. Power is transmitted through a 9-speed AMG Speedshift MCT 9G automatic transmission in which a wet start-off clutch replaces the classic torque converter.

The Mercedes-AMG C 63 S E Perfromance comes standard with AMG Ride Control with Adaptive damping suspension and integral steering which is also offered on the C-Class but the steering angles are different: up to 100 km/h the rear wheels turn in the opposite direction to the front wheels by 2.5 degrees and above 100 km/h they turn in the same direction by up to 0.7 degrees.

Values in brackets are for the T-Model version