Having Ultimate Stance All To Myself 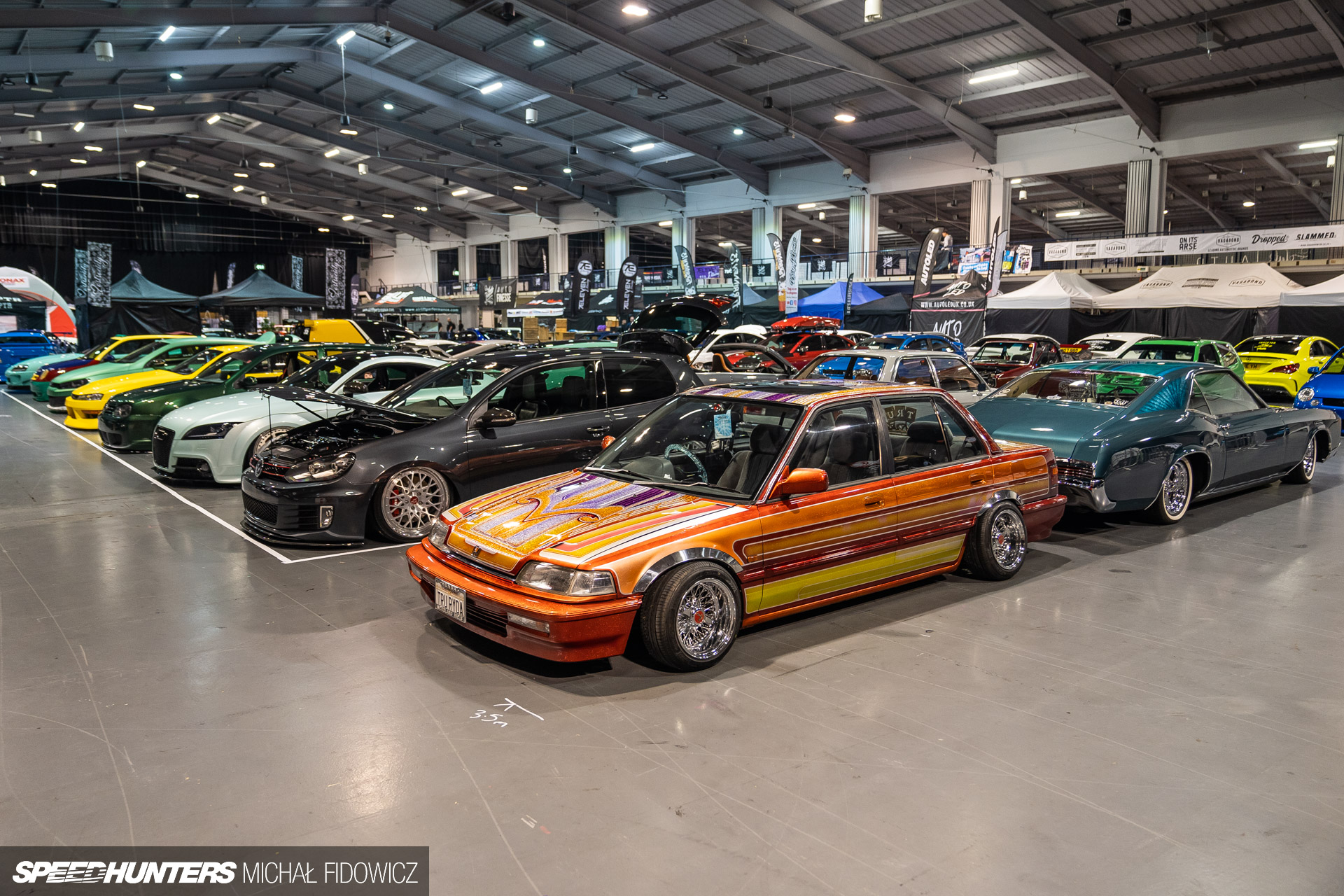 I love taking photos in car event environments bustling with people. It gives everything in frame life, and always enhances the storytelling.

But sometimes, an opportunity to focus solely on the cars arises. The lovely bunch organising the last UK modified car show of the year, Ultimate Stance, allowed me to do just that by granting late Saturday evening access before the show officially opened on Sunday morning. Ultimate Stance is known for attracting huge crowds, so this was an opportunity I couldn’t pass up.

Ultimate Stance is the sister show to the UK’s show season opener, Ultimate Dubs, which you may have seen coverage of on Speedhunters in the past. Having the same organisers and the same venue, there is some obvious cross-pollination of the two events.

The all-original MK1 Caddy parked up in Telford International Centre’s main lobby was incredible, as was the 1954 right-hand drive Barn Door. The owners of the Bus were the last in and still setting up for Sunday when I arrived.

Admittedly, I have written about VWs a lot this year already, so seeing as there are no make or model restrictions for Ultimate Stance, we’ll focus on the other stuff this time around.

After the small Ultimate Dubs section, the entrance hall stretched out with a tease of what you could expect inside. There’s not any sort of brand discrimination here, but as the name suggests, stance is compulsory.

Apart from security, these gents getting some RC practice in would be the last people I’d really see for the rest of my time at the show on Saturday evening. From here on out, I had Ultimate Stance all to myself.

The first hall greeted me with a line up of cars headed by this black EG-series Honda Civic. The smoothed bay was a sign of things to come, as I’d find a lot of builds with an emphasis on the engine bay as I made my way around. Nearly everything on display was a full-on show car.

Including these little things…

We all know a child’s earliest years have a huge influence on the rest of their upbringing. I’m happy to see the Speedhunters influence is here and setting future car builders on the right path!

I’ve seen all sorts of wheel setups over the years, but retrofitted McLaren 720S wheels are not something I expected to see any time soon.

If OEM is less your thing, you might appreciate a single-piece sporty Japanese wheel instead. Motorsport heritage overload in this sector, with these RAYS Volk Racing TE37s being king of the castle for most.

I think my highlight of this hall had to be the fully carbon-Kevlar, Mazda three-rotor-powered Corvette.

Built by Axel Pedro Hildebrand and debuted at the Goodwood Festival of Speed hill climb earlier this year, the Corvette is a true purpose-built drift car. I managed to catch it entering, and I can comfortably claim it’s one of the loudest cars I’ve ever heard. It shook the ground I was standing on.

The ‘Vette is topped off with a Garrett turbo on the inside and Blitz 003 wheels on the outside, making it a great example of a crazy vision getting pushed into an extreme, real outcome.

Parked next to it was Joseph Barber’s BMW E30. It’s a totally different kettle of fish to the Corvette but, if anything, showcases the range of stuff on show across just one of four halls at Ultimate Stance.

There’s a long hallway at the venue which allows you to cut across two halls, and every year this spot is home to some real show-quality metal. For 2022, the organisers dedicated it to a line of Porsches.

In my last Speedhunters piece – a visit to Dub Club – there was a car in the background of my photos that a few of you wanted to see more of. Your wish is my command!

Yup, an HKS-liveried Škoda Octavia estate, built by Andy Cowley and inspired by the ’90s liveries seen in the JTCC (Japanese Touring Car Championship). Check out the fitment on that rear aero disk.

Moving back into the halls now. I quickly found myself drawn over to the lowrider section, hosted by the Tru Rydaz group. Amongst the more traditional Cadillacs on show was this EF-series Honda Civic sedan.

This is a crazy little thing with an unmatchable attitude and one of the wildest paint jobs I’ve seen on a show car. Whilst I was looking at this car, for a split second I was transported from Telford to Southern California.

The overall standard of the cars inside the venue was superb. One thing that stood out to me though was the general colours of cars on show: Bright, glossy hues are in on the more extravagant builds. It seems if people are changing the colour of their car, be it with paint or a wrap, they’ll lean in favour of the bright blues, yellows, etc. Where have all the dark metallic cars gone?

Moving over to the front of the main stage, the main attraction for me here was a Lamborghini Gallardo. The childhood poster car for a lot of people around my age, these have all but vanished from the roads in the last couple of years, so seeing a Gallardo today is a much bigger deal compared to the modern supercars for me. I don’t think I’d ever seen a bagged one before Ultimate Dubs.

Here’s a real throwback to the ’90s and early-’00s British modified car scene. I’m always weirdly drawn in by these time capsule builds. I find that all of these Max Power-era cars are genuinely very different from each other, standing out in ways that contemporary builds haven’t fully figured out yet.

There were some great cars in these halls, but when it comes to personal preference, there’s a specific place in the venue that you’re likely to find me.

This place is known as the VIP hall, a carpeted area that always delivers in terms of quality and intrigue.

There were two standouts for me in this section this year, the first being Jamie Rogers’ Jaguar XJ6.

I’m a sucker for a big, luxurious barge. When you think of this category of car, you naturally jump to the S Class Mercedes-Benz or an LS Lexus. Recently, Netflix released its new season of The Crown, focusing on the British royal family, and these Jags are all over every episode. It’s easy to forget that Jags were used to transport some of the world’s most high-profile people around Britain during the ’80s and ’90s.

I actually briefly got my camera out on Sunday too, managing to capture some of the in-between moments in the VIP hall. Like I said, this was the place to find me all weekend.

The second car I wanted to focus on is Michael Scullin’s Ford Sierra on hydraulic suspension. Having driven the car from Northern Ireland, Michael was telling me about the dynamics of the Saab B204 he has under the bonnet. As you can see, it’s attached to a giant turbo, which at the moment lags quite a bit until the boost hits and you’re whacked with 500-odd bhp all at once through the rear wheels. What a crazy setup.

Fortunately, I had managed to just wrap up taking photos in the VIP hall when a notice came over the public announcement system: “Could all remaining media please make their way to the nearest exit, the venue is closing for the night.”

It was pretty surreal walking about numerous halls with my camera, having a chance to appreciate the details of all the cars for myself. It made me appreciate the hustle and bustle of it all a little bit more, whilst also giving me an insight into the cars I wouldn’t usually go looking around with a group of friends during a busy show day.

As always with my show coverage, I’ll leave you with an extended album – see you all at the next one!

More stories from the UK on Speedhunters