A Week With: 2023 Cadillac Escalade-V 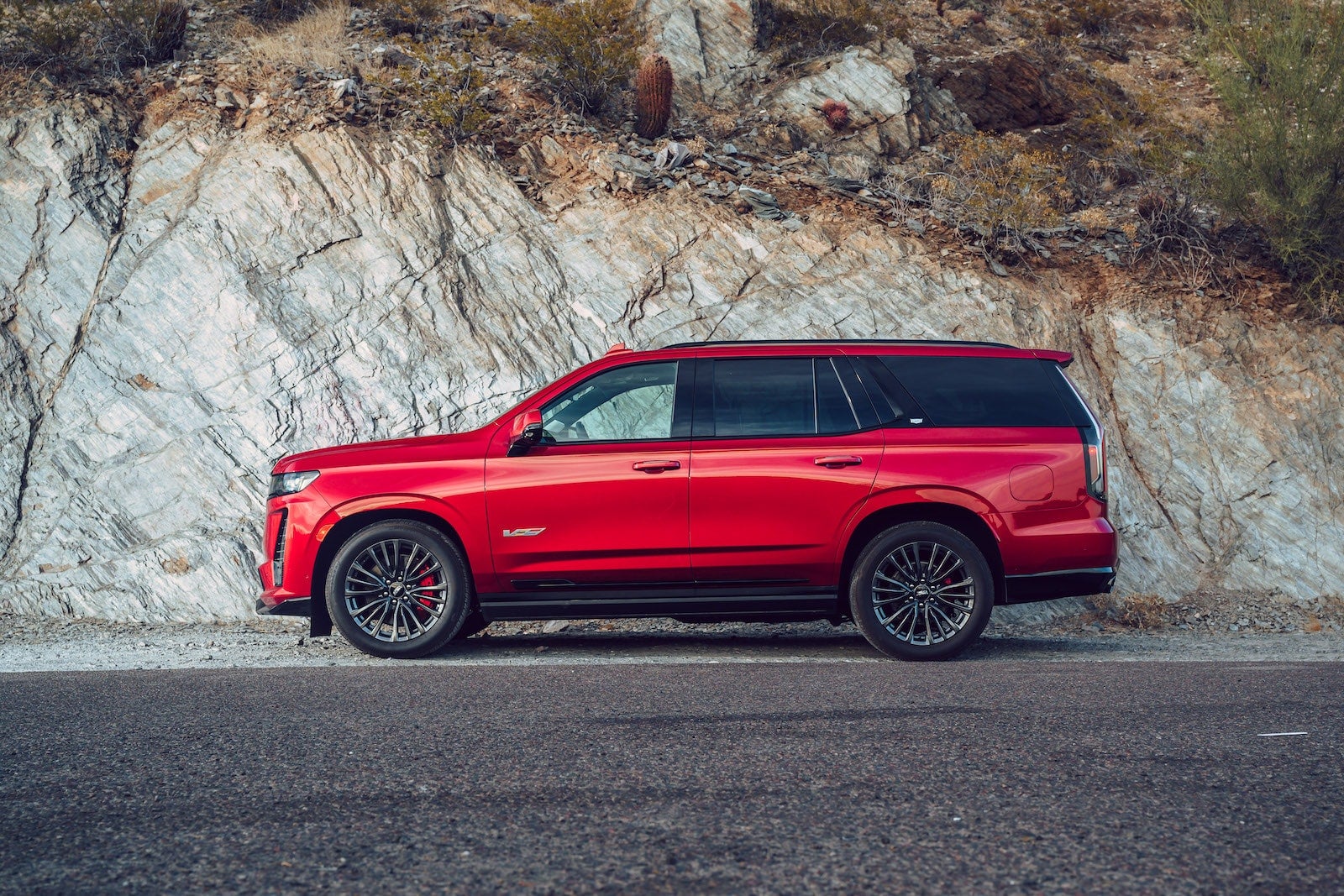 There’s a dichotomy going on within the automotive industry, one best symbolized by the mere presence of the 2023 Cadillac Escalade-V.

As automakers cut the number of traditional internal combustion engine vehicles in favor of electric vehicles, the number of extreme high-performance machines seem to be proliferating. They’re a raucous middle finger to those who would extinguish the thrill that comes from speed powered by burning old dinosaur remains.

And so, there’s something comforting and fun about the familiarity of what the 2023 Cadillac Escalade-V offers. In its own way, it’s no different from what the brand offered in the 1957 Eldorado Brougham: namely, full-size comfort, every mod con, effortless power with an over-the-top glamor that leaves little doubt that you have arrived. Certainly, if they don’t see you coming in your Escalade-V, they’ll hear you.

Offered in both standard and extended wheelbase models, the Escalade-V offers what you’d expect: a more potent powertrain, suspension upgrades, exterior mods and a long list of indulgent comfort and convenience features that you’d anticipate from Cadillac.

But as indulgent as the Escalade-V is, its pampering is a different sort, an evil elegance that taps your inner fiend. It’s satisfyingly naughty, an oversize indulgence that makes little sense until you drive it. Then, you understand.

If there’s one thing that could be said of the 2023 Cadillac Escalade-V, it’s that it’s not a shrinking violet. Our standard-length Escalade-V seemed larger than its 212-inch length suggests. Credit its immense slab sides and upright front grille, lending it an aura of a metal-clad garden shed. But garden sheds are practical for holding a lot, and so did the Escalade-V, although no more so than a lesser Escalade or, for that matter a Chevrolet Tahoe, with which it shares its architecture.

But practicality is far from this vehicle’s first purchase consideration. It’s like saying, “forget the Ferragamo slip-ons; I’ll wear a pair of Hush Puppies instead.” This V is about presence and power, something it provides in spades.

It wears front and rear fascias, quad exhaust outlets with red brake calipers, exclusive 22-inch wheels and V-Series badging. Certainly, it stands apart from other Escalades, telegraphing its intent with miles of mean black trim. Chrome has no home on this particular Caddy.

If you’re already familiar with other Cadillac Escalade models, then you’ll know what to expect: double-stitched semi-aniline leather, real wood trim, and an extraordinary 38-inch curved OLED display atop the instrument panel. Of course, there are massaging seats; a feature that debuted in turn-of-the-century Cadillacs, as well as heated seats, which Cadillac first offered in 1966. There are seat chillers as well, and a center console bin that can be optioned as a refrigerator/freezer for $700.

If there’s one complaint, it’s that the luxury seems to dissipate the further back in the cabin you go. Given the increasing competition in this segment — did someone mention the Jeep Wagoneer or Land Rover Range Rover — this needs fixing.

But there’s boatloads of space: There’s 168.4 cubic feet of passenger space and 25.5 cubic feet of cargo space. That said, third row legroom is a little dear on the standard-length Escalade at 34.9 inches. Going for the longer wheelbase model adds 1.7 inches.

Under the square-jawed styling of the Escalade-V resides a modified version of the CT5-V’s 6.2-liter supercharged V-8 engine mated to a 10-speed automatic transmission and all-wheel drive. Towing is rated at 7,000 pounds; payload is rated at 1,330 pounds, which isn’t much. Given that average American male weighs 200 pounds and the average woman 170 pounds, according to the CDC, four of each would surpass the payload by 150 pounds before carrying any extra cargo.

Beyond the powertrain Cadillac has made a number of performance upgrades, This Escalade’s four-wheel independent suspension wears Magnetic Ride Control and an adaptive air suspension with uniquely tuned rear air springs and dampers, along with specific V-Series software.

The driveline’s engine performance, suspension, brake feel, steering, and sound can be adjusted. There’s even launch control. Sweet. Cadillac’s excellent Super Cruise hands-free driver-assistance is optional. But this rig is so much fun, why would you want it to drive itself?

Surprisingly, the National Highway Traffic Safety Administration rates the Escalade-V with four stars in crash safety, as its results are a mixed bag. Front crashes rate five stars for the driver buy four for the passenger. Side crashes rate five stars, but worryingly, rollover protection merits only three stars. The Insurance Institute for Highway Safety hasn’t tested the vehicle.

The Escalade-V has the technology you’d expect, including Apple CarPlay and Android Auto, wireless smartphone charging and a built-in Wi-Fi hotspot. And the 36-speaker AKG premium sound system is an unconditional pleasure, an astounding system that reveals details in your favorite songs that you’ll hear for the first time.

Maybe Walt Disney could get elephants to perform ballet in his film, “Fantasia,” but reality is far different. There’s no escaping its size, but this petrol-powered pachyderm proves fairly sprightly for its size. There’s no mistaking it for a Mazda Miata, but considering it’s the size of a Manhattan studio apartment — heck it does have a fridge — it acquits itself well while cornering or executing a sudden lane change.

Credit microchips and the suspension for its attempts at cheating physics. It’s remarkable. And while it’s able to imitate a far more limber athlete, it can still be the consummate Cadillac, coddling and comfortable.

And the sound it emits? Heavenly. It burbles at idle, roars deafeningly as speed increases, changing to exhaust pops and crackles as the vehicle slows.

Is it a hoot to drive? Depends on what you want. Some won’t be bothered by its size, others will. Still, it’s quite impressive for a motor vehicle with the aerodynamic profile of a garden shed.

But the EPA’s fuel economy figures prove true, with our test drive yielding 10.5 mpg in city driving and 15 mpg on the highway. Oh, and premium fuel is required. But if you can afford this bus, you can afford the fuel.

Cadillac is trying mightily to climb up to the top of the mountain it once ruled unequivocally for decades. The 2023 Cadillac Escalade-V is an unabashed Cadillac in the best tradition. It encapsulates the swagger, style and speed the well-off treasure.

How much will a 2023 Cadillac Escalade-V cost?

How much horsepower will the 2023 Escalade-V have?

How fast will the Escalade-V be?

The Escalade-V has a zero-to-60 time of 4.4 seconds, according to Cadillac.