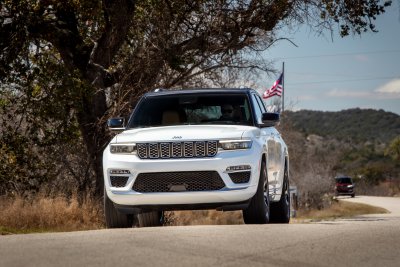 The Jeep Grand Cherokee was one of the earliest SUVs on the road in the modern era, sharing the spotlight with the Ford Explorer in the early 1990s. After almost 30 years and numerous competitors Jeep added an electric motor and battery to the nameplate for the 2022 Jeep Grand Cherokee 4xe.

Pronounced “four-by-e,” it’s the name for Jeep’s electrified models, the lineup of which now includes the Wrangler and Grand Cherokee. The four-by part denotes the company’s standard four-wheel drive.

The 4xe powertrain is good for 25 miles of all electric range and 56 miles per gallon equivalent (mpg-e) when both systems are running. The electrification is offered on all trims of the Grand Cherokee from base ($57,700) to Summit Reserve ($74,300) and it takes about 2 hours to recharge on a 220-volt outlet.

The Jeep Grand Cherokee was new across the board for 2022 with a light exterior redesign that shaped it more like the larger Jeep Wagoneer. It features a lowered, more tapered roof than the previous model improving aerodynamics. A lower beltline and bigger windows allow more light into the cabin. New grille shutters, front wheel spats, air curtains and hood shape also add to the plug-in hybrid’s efficiency.

The wheels are spaced farther apart for better handling and for the first time, a gloss black roof is available on the Overland models and comes standard on Trailhawk, Summit and Summit Reserve. There are eight wheel choices available in sizes up to 21 inches.

The cabin of a Jeep Grand Cherokee has always been above average, but the new generation takes it another step forward. New slim air vents offer a cleaner look and the new seats have an adjustment for under-knee support. Those leather-wrapped perches get diamond-shaped stitching in the more expensive models while wood trim adorns the doors and dash. The hood is taller than the previous model blocking what is directly in front of the vehicle, though the forward-facing camera can help.

Buyers get two 10.1-inch screens, one as a digital gauge cluster and one as touchscreen infotainment. It can also be optioned with a 10.25-inch passenger-side screen with built-in FireTV. That allows the passenger only to watch Netflix, Prime and anything else the Amazon Fire Stick has access to. The only downside is that the screen will catch reflections at the right time of day.

The menus get deep in the infotainment system, but most of the stuff a driver needs daily is easy to get to. There are mode buttons on the bottom of the screen for media, phone seats and more, and it was quick to find a phone for wireless Apple CarPlay.

Underneath the central screen are the climate controls along with volume and tuning knobs for the touchscreen. The center console, in addition to the gear selectors, has the ride height and drive mode adjustment toggles, which east to reach and invite usage as the driving situation changes.

The 2022 Grand Cherokee 4xe comes with two rows of seats with space for five adults comfortably. There is plenty of space for two child seats, though If buyers want a third row they could step up to the Grand Cherokee L, or the Wagoneer family, although no hybrids are available on those models.

Moving to the powertrain, the 4xe comes with a 2.0-liter turbocharged four-cylinder engine. The alternator and torque convertor are both replaced with electric motor/generators for a total system output of 375 horsepower and 470 pound-feet of torque. The Grand Cherokee has an eight-speed automatic transmission and can tow up to 6,000 pounds when properly equipped.

Hybrid modes, in addition to the Jeep drive modes like Auto, Sport, Snow, etc., include Hybrid, which blends torque from the electric motor and gas engine optimizing for efficiency. Electric uses only the battery until it reaches the minimum charge, unless the driver floors it, in which case the engine kicks in. Finally eSave uses the engine, saving the battery charge for later use.

The 2023 Grand Cherokee 4xe is amazingly quick from a standstill due to the electric motor’s instant torque. The eight-speed is smooth and passing maneuvers on the expressway are easy. Bumps don’t upset the comfort and going off road is exceedingly easy and drama free.

The brakes help regenerate energy for the battery so although they’re stiff when pressed, they still take some getting used to. The first few inches have just a little bit of braking with a lot of regeneration. The second half is mechanical and feels more traditional. Coming off the brakes feels a little weird too, almost like they stick for a second before the vehicle gets rolling.

That part is annoying when trying to inch around a parking lot, but with four-wheel steering, and those camera angles, squeezing into tight spots is easy.

All of the expected safety features like adaptive cruise control, lane keeping, emergency braking, blind spot monitors and the like. Available technologies include a night vision camera with pedestrian and animal detection, Intersection Collision Assist, parking assist and the surround view camera. It’s Level 2 driver assist system requires hands on the wheel and eye on the road.

With the combination of efficiency, luxury and off-road efficacy the 2022 Jeep Grand Cherokee 4xe is hard to beat for the average outdoor enthusiast. There are less expensive options, but they’re not backed by decades of Jeep robustness. If a buyer is planning to hit the dirt monthly, if not weekly for adventures, it’s one of the best options available.